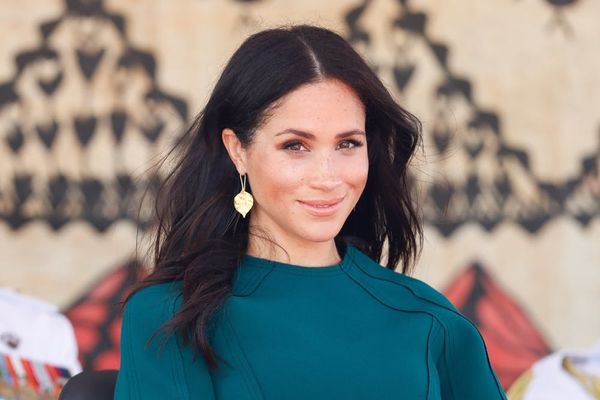 Meghan Markle is around seven months pregnant and will soon give birth to her first child — but not before celebrating with friends. The Duchess of Sussex turned up in New York City this week to be feted at an intimate baby shower with some of her nearest and dearest. Here’s everything we know about the small, private party and her trip to New York.

1. She arrived just after Valentine’s Day. According to Harper’s Bazaar, Markle flew from London to New York on Friday, February 15, a few days ahead of the February 20 shower. She’s set to return to the UK this week, before she and Prince Harry travel to Morocco as part of their royal duties.

2. This is an unofficial visit. Unlike the upcoming trip to Morocco, Markle’s NYC getaway is for private and personal reasons. That means Kensington Palace hasn’t released any official photos of the visit and will not be commenting on the trip or the baby shower.

3. She got some quality bonding time with her BFF. Before attending her baby shower, Markle reportedly hit the town with her BFF, stylist Jessica Mulroney, whose twin sons famously acted as page boys at the royal wedding. According to Harper’s Bazaar, the ladies enjoyed macarons at Ladurée in New York’s SoHo neighborhood on Saturday, February 16.

4. The guest list is small. Royal reporter Omid Scobie reports that the shower will be attended by approximately 20 of Markle’s closest friends, including her former Suits costar Abigail Spencer, who was spotted outside a hotel on the Upper East Side with what appeared to be a baby gift. Serena Williams and Amal Clooney are also rumored to be among the guests, and Mulroney is believed to be responsible for coordinating the special event.

5. The shower is in Manhattan. The duchess was spotted outside the rumored location on February 19. She kept things chic but low-key in a vintage coat, black skinny jeans, nude Stuart Weitzman heels, Le Specs sunglasses, and a Carolina Herrera bag.

6. Prince Harry is keeping busy, too. While Markle was in New York, Prince Harry was serving lunch to kids on a visit to a “Fit and Fed” half-term initiative in Streatham. “Fit and Fed” aims to provide nutritious meals to students during school holidays.

7. The rumored party favors are amazing. According to People, more than a dozen Away suitcases were delivered to the hotel where the shower is taking place. Photographers also spotted a cotton candy machine being wheeled in.

(This post was corrected to note the correct date of the shower.)

If you were throwing a baby shower for Meghan Markle, what would you include? Let us know @BritandCo!

Desiree O
Desirée O is a ‘Professional Bohemian’ who loves anything and everything related to the arts, entertainment, and pop culture. She ADORES being a ‘Newsy’ for Brit + Co, covering all of the latest tidbits of awesomeness that you want to read about. When she’s not writing, she’s either making messy art, going on long adventurous walks with her camera, or poking around over at bohemianizm (http://www.bohemianizm.com/). You can find out about Desirée O and her work at http://DesireeO.com/ or follow her on Twitter @DesireeO.
Celebrity Baby
Celebrity News
Celebrity Baby Royal Baby Royal Family