How to Make a Four-Course Brunch Using Only Your Microwave 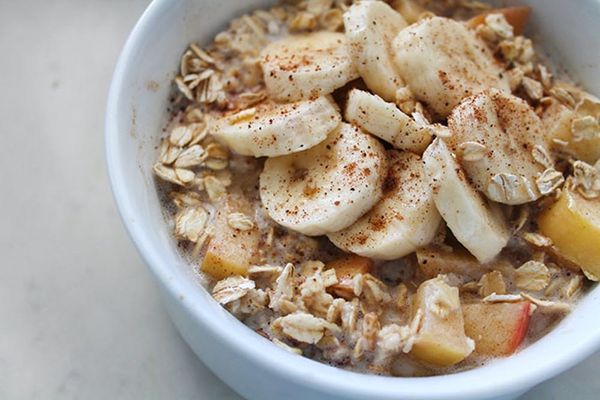 After being amazed and inspired by all the gourmet recipes you can make using just your microwave, we decided to take on the challenge and make a whole meal with our trusty old nuker. What better than a full-on brunch with eggs in a nest, french toast, bacon hash, cinnamon apple oatmeal, and hot coffee chocolate? Amaze your friends by whipping up a four-course meal for two, faster than you can say poppity ping.

1. Eggs in a Nest: Start off with a deliciously classic appetizer.

Using your cookie cutter, make a whole in the middle of the bread. Crack an egg into the hole. Microwave for a minute at medium power, then in 30 second intervals until the egg is cooked to your liking. Repeat with the other slice of bread and egg.

A cute way to start off your brunch!

Cut up your apple into small pieces. Put it in a microwave safe bowl, and add butter and sprinkle cinnamon. Microwave for 1 minute. Remove from the microwave and mix so that the butter and cinnamon are dispersed. Microwave for another 30 seconds. Set apples aside and cut the banana into small slices. Prepare your instant oatmeal according to the directions, then mix in apples, and top with banana.

Adding fresh fruit (especially with a bit of melted butter ) to your oatmeal never fails to please.

– salt and pepper to taste

Even using the microwave, the potatoes get a crispy little tan. Delicious!

4. French Toast: Using the microwave to make french toast is so much easier, and requires minimal cleaning.

– 2 slices of bread (we used challah)

Mix the milk, egg, and vanilla extract together. In a small microwave safe ramekin or bowl, tear one of the slices of bread into pieces and fill the ramekin. Drizzle the egg mix over the bread. Repeat with the other slice of bread. Microwave in the oven for 2 minutes, or until it’s no longer runny. Sprinkle with cinnamon.

We love this fun spin on french toast that’s inspired by bread pudding.

Pour instant chocolate mix and half of the coffee mix into a microwave safe mug, and repeat. In a separate microwave safe bowl or mug, microwave the milk for 2 minutes. Pour about half the milk into both cups and stir vigorously with a spoon until the powder dissolves. Distribute the rest of the milk between the two cups and enjoy.

We love how well the bitter coffee pairs with the rich hot chocolate.

Who will you be making microwave brunch for? A loved one, or your dearest roommate? Tell us in the comments or on Facebook or Twitter.

Nanette Wong
Nanette is an all around food enthusiast who loves transforming basic everyday foods into something delicious, and of course, full of sprinkles. You can see more of her at www.nanettewong.com.
Savory
DIY Recipes
Savory Sweets
The Conversation