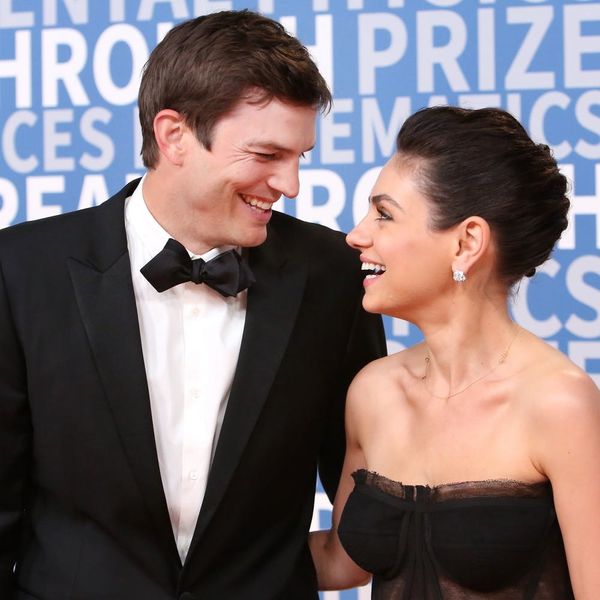 Mila Kunis does her best to ignore the gossip about her family, but as she revealed to her friend and The Spy Who Dumped Me costar Kate McKinnon in an interview for Cosmopolitan‘s August issue, sometimes it’s unavoidable.

“I don’t read anything about myself,” the actress told McKinnon. “I genuinely don’t know what’s written about me… other than I know that I’m pregnant about once a year and my husband [Ashton Kutcher] and I are getting a divorce once a year. I know this because I go down the grocery store aisle, and I see it on the cover of magazines and I’m like, ‘Oh boy, OK!'”

Kunis knows not to pay any mind to the fake headlines, but that doesn’t mean they don’t affect her in other ways. “The only thing that’s upsetting is my parents and my grandparents sometimes get confused,” she explained. “At one point when I was pregnant, [the tabloids] said that I had an emergency and was rushed to the hospital, and my face was on the cover. The amount of stress that caused my family, nobody will understand.”

The constant speculation about whether she’s pregnant has had another unintended consequence, too. Although she has said in the past that she and Kutcher want to stop at two kids — they’re already the parents of three-year-old daughter Wyatt and one-year-old son Dimitri — her father isn’t giving up on the possibility of more. “My dad is always very hopeful that the [rumors about] pregnancies are true,” Kunis said in the Cosmo interview. “He’s always like, ‘Is there really another?'”

Mila Kunis is our August cover star! 🔥 The actress opens up about social media, crazy tabloid rumors, and taking on life with husband Ashton Kutcher in an interview with costar (and friend!) Kate McKinnon. Click the link in our bio for the highlights. @michprom Photo by @kaizfeng Styled by @kgsaladino

The actress also opened up to the mag about why she’s not on social media, saying, “I was so late to that train. I remember at some point my roommate was like, ‘You know, there’s a thing called Facebook,’ and I was like, ‘What is this Facebook? Who’s gonna poke each other? That’s just weird.'”

She almost changed her mind when she and Kutcher reconnected — he’s active on social media — but she decided against it when she saw another side to the internet. “It took an ugly turn and became all about who can be the loudest, who can be the angriest and the most negative,” she told McKinnon. “Then it’s just not a fun game to play.”

How do you deal with rumors in your own life? Let us know @BritandCo!