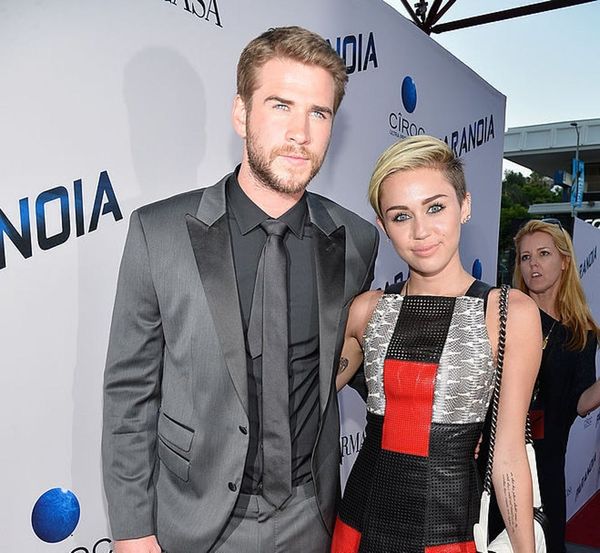 Once upon a time, Miley Cyrus and Liam Hemsworth kept their relationship relatively private. But even before the singer released her “Malibu” single, which is all about their love, the two had started opening up and sharing glimpses of their lives together. And now, as Cyrus pens new music and continues to share her relationship with the world, she’s revealed that she can’t stop writing songs about her super-famous fiancé.

In a pic she posted to Instagram Wednesday, we see the 24-year-old looking cozy on her bed, guitar in hand and lost in thought. If you look closely, you can even see that she’s wearing a “LIAM” earring. Yep, they’re just *that* cute together.

She captioned the photo, “Seems all I can do… is write songs about YOU… ❤️🎼❤️🎼❤️🎼.” And we gotta say, those could be lyrics for her next song. Since Cyrus has been wearing her engagement ring again as of January 2016, it’s clear that there’s no rush to the altar. But it’s also clear that the love is as strong as ever between these two.

Fans agree and have been leaving comments like, “You’re sooo in love💚💚” and “Good, you two are absolutely beautiful together,” as well as “If you are referring to that tall drink of water of yours, girl, who could blame you. 😘😘🎹🎶🎤👊.”

Are you happy that Miley Cyrus is writing more music about Liam Hemsworth? Let us know @BritandCo!

Desiree O
Desirée O is a ‘Professional Bohemian’ who loves anything and everything related to the arts, entertainment, and pop culture. She ADORES being a ‘Newsy’ for Brit + Co, covering all of the latest tidbits of awesomeness that you want to read about. When she’s not writing, she’s either making messy art, going on long adventurous walks with her camera, or poking around over at bohemianizm (http://www.bohemianizm.com/). You can find out about Desirée O and her work at http://DesireeO.com/ or follow her on Twitter @DesireeO.
Miley Cyrus
Music
Miley Cyrus Music
More From Music