‘Modern Family’ Just Revealed That a Major Character Is [Spoiler] 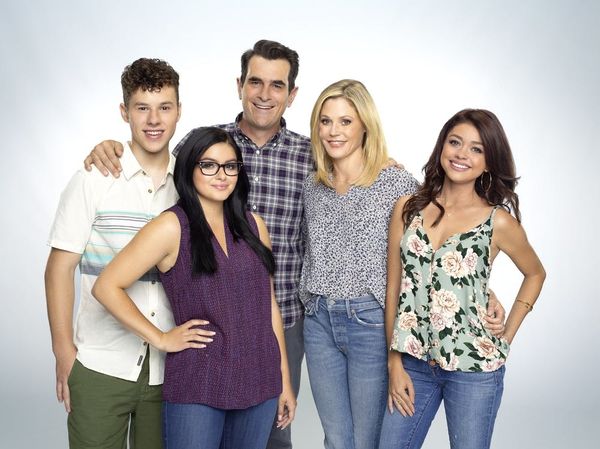 Earlier this season, Modern Familyteased the death of a major character. Many fans felt the reveal didn’t exactly live up to the promise, but the ABC comedy just managed to pull off another major twist: One of the show’s main characters is pregnant. Warning: Spoilers ahead, obviously!

The Wednesday, November 7, episode revealed that Haley Dunphy, played by Sarah Hyland, is expecting. The news came as a surprise — while she and on-and-off (currently back on) boyfriend Dylan (Reid Ewing) were driving bumper cars at a carnival, Dylan bumped into her car while she was putting on lipstick, nudging the tube straight up her nose.

At the hospital to get the lipstick removed, Haley underwent some routine ER bloodwork that revealed the unexpected baby news. Haley and Dylan had been trying to prove to the Dunphy family that they had matured — but a baby certainly isn’t what they had in mind. The episode ended when the pregnancy was announced, so viewers will have to keep watching to see how it plays out.

Hyland hinted at the episode’s reveal in an Instagram post before it aired, joking that it was going to be “a BUMPY ride!” Afterwards, she posted a photo of herself wearing a pregnancy suit, giving viewers a glimpse at what’s in store for upcoming episodes.

Well I guess the cat’s outta the bag!!! Or more like the bump’s outta the shirt!..... that was a horrible joke. I apologize.

“Well I guess the cat’s outta the bag!!!” she captioned the snap. “Or more like the bump’s outta the shirt. … That was a horrible joke. I apologize.”

ABC has yet to announce whether Modern Family will return after its current 10th season. Earlier this year, there were reports of a spinoff, but the network has not confirmed any further news on a potential new series.

What do you think of Haley’s pregnancy story line? Let us know @BritandCo!