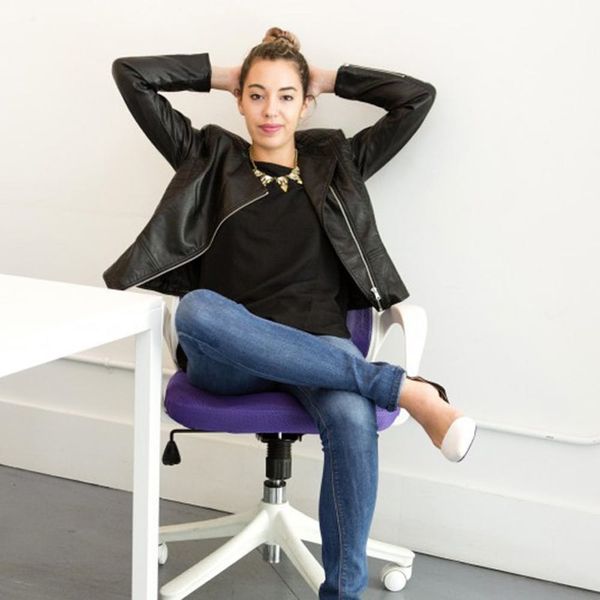 “Try this when you’re feeling tentative, but want to appear more confident. In addition to causing hormonal shifts in both males and females, these poses lead to increased feelings of power and a higher tolerance for risk,” says Goman. Basically, your physical posture can literally change not only how people perceive you, but also how you feel. A study found that people who sat up straight were more likely to believe the positive comments they wrote about their qualifications for a job. Those who tended to slump at their desks were less likely to accept their own statements as valid.

2. Open up. Uncross your arms and legs. Yes, it may be more comfortable to sit with your arms crossed, but then you seem defensive. Plus, when you cross your arms and legs you make yourself smaller, which puts you in the opposite of a high power pose. Your testosterone will automatically decrease and then cortisone will quickly increase.

3. Squeeze a ball in your left hand. Another tip that works especially well for athletes is to squeeze a ball in your left hand, Goman says. “When seasoned athletes underperform, they may be focusing too much on their movements (which, for right handed people, is a right hemisphere brain function), rather than relying on the automatic motor skills developed through years of practice (which are associated with left hemisphere function). Research found that athletes who squeezed a ball in their left hand performed better and were less likely to choke under pressure.” This is something super easy you can do while sitting at your desk.

4. Back, back, back it up. Literally stepping backwards will help you, Goman says. Research at Radboud University, Netherlands, showed how backward motion was a powerful way to enhance cognitive control. The researchers found that when people encounter a difficult situation, getting them to step back boosted their confidence and ability to cope.

5. A little touch. Some people just naturally touch people more. If you aren’t one of these people, work on it. Goman points out that touching someone on the arm, hand or shoulder for as little as 1/40 of a second creates a human bond. “In the workplace, physical touch and warmth are established through the handshaking tradition, and this tactile contact makes a lasting and positive impression. Studies show that people are two times more likely to remember you if you shake hands with them. The researchers also found that people react to those with whom they shake hands by being more open and friendly — which is definitely a confidence builder!”

6. Smile. A genuine smile can make a real difference. Goman says it not only stimulates your own sense of well-being, but it also conveys to those around you that you’re approachable, cooperative and trustworthy. “A genuine smile comes on slowly, crinkles the eyes, lights up the face and fades away slowly. Most importantly, smiling directly influences how other people respond to you. When you smile at someone, they almost always smile in return. And, because facial expressions trigger corresponding feelings, the smile you get back actually changes that person’s emotional state in a positive way,” she says.

7. Hand jive. Get those hands moving! Broca’s area in the brain, which helps produce speech, is active when we’re talking and when we make gestures with our hands. This is great news for those of you that tend to use your hands when you talk. It actually helps you form clearer thoughts, Goman says.

8. Keep it down. Before a big phone call or interview, Goman says keep your lips together and make the sounds “um hum, um hum, um hum.” Also, and this is especially for women, practice to make sure your sentences don’t end on a higher pitch. Be authoritative. Try to keep your voice low. Think Johnny Cash.

Got any tips about body language? Tweet us @BritandCo and let us know!