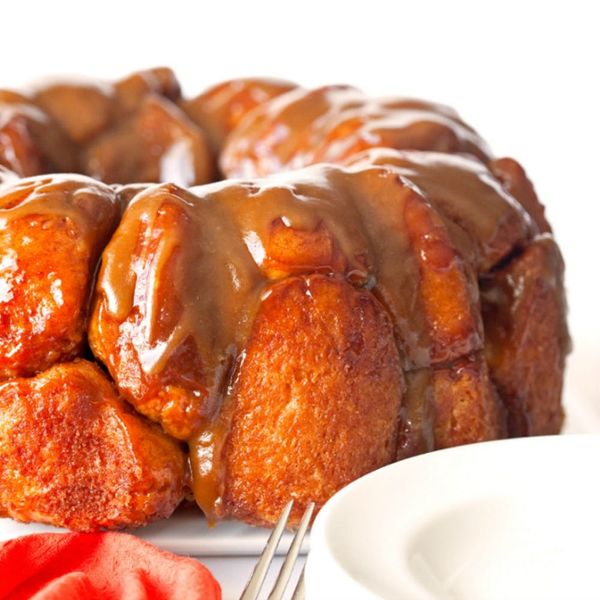 Monkey bread, that delicious baked confection, comprised of balls of dough that have been dipped in butter then rolled in spices before being compressed together in a baking pan. The beauty of monkey bread is how easily it pulls apart into bite size pieces, releasing aromatic vapor. Because each ball of dough is snuggled up next to the other 39 balls of dough, there are few crusty edges to a monkey bread. The interior is soft and chewy, not crunchy. Some bakers sweeten their monkey bread with sugar and cinnamon before drizzling icing on top. Others like theirs savory, with garlic, onions and even cheese. Here are 15 monkey bread recipes — some sweet and others savory — one more delicious than the next.

Also known as pull-apart bread or bubble bread, monkey bread has been around since the 1950s, according to The American Century Cookbook, by Jean Anderson (Clarkson Potter, New York; 1997). But it’s widely believed to have seen a resurgence in the ’80s when Nancy Reagan served it in the White House and her family recipe was printed in the American Cancer Society Cookbook in 1985. The First Lady’s recipe is scratch-made and more buttery than sweet — it calls for more than a cup of butter, but only one tablespoon of sugar. While today’s quick-bake versions often call for store-bought biscuits, it’s even better when the dough is homemade, of course. Over at Deliciously Yum, Kathi is baking a scratch-made monkey bread with salted caramel sauce. (We knew that would get your attention!) She claims that making dough from scratch is really not that difficult. It just needs to spend some time in the refrigerator to properly rise. Kathi says her monkey bread with salted caramel is so good, we’ll never go back to store-bought dough again. We believe her.

Do you have a favorite monkey bread recipe? Tag us on Instagram @britandco.

Sally Jones
Sally Jones is a writer and editor living in New York City. She has worked at many websites including iVillage, Ladies Home Journal, More, Parenting, Cosmopolitan, The Knot and YourTango, in jobs ranging from editor to COO. Renovation and interior design are her unhealthy obsessions hobbies. She has renovated every home she's lived in, including the rentals, and like... whoa, who does that? You can catch her at her blog Renov8or.
Food News
The Conversation
More From Food News