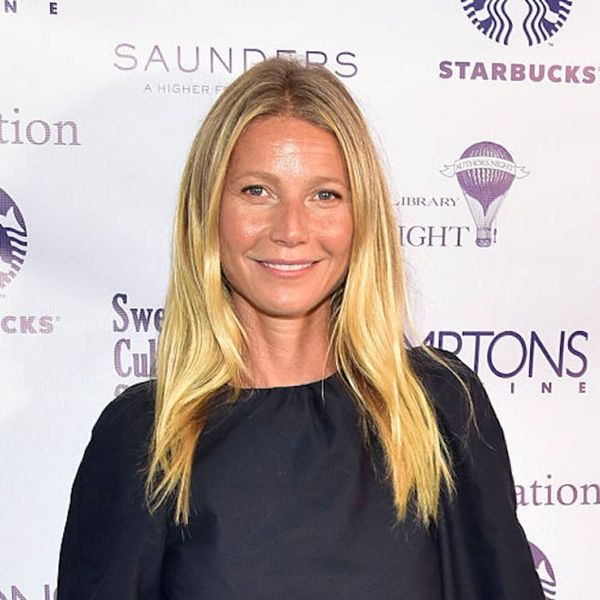 Happy hump day! From a fresh-faced Gwyneth to Chrissy Teigen’s chef-in-training, check out six of today’s top news items below.

#nomakeup for my 44th birthday, embracing my past and future. Thank you for the instalove #goopgoesmakeupfree @goop

1. Gwyneth isn’t known to have a heavily made-up face as it is, but for her 44th birthday, she decided to go bare-faced in a selfie for fans. “#nomakeup for my 44th birthday, embracing my past and future,” she captioned the photo. “Thank you for the instalove #goopgoesmakeupfree.” She looks amazing.

I have dreamed of this day!

2. Chrissy Teigen’s daughter Luna is already taking after her mom in the kitchen. This picture just KILLS. “I have dreamed of this day!” Chrissy captioned the photo of little Luna in an ADORABLE puffy chef’s hat held in front of a cast iron pan on the stove, ready to go. Chrissy herself is, of course, a mean cook and will likely share a lot of time in the kitchen with her daughter.

3. Rob Kardashian and Blac Chyna have apparently NOT broken up but things are not good.No kidding! After Rob tweeted out his little sister Kylie’s phone number to retaliate for not inviting Blac to a baby shower the Kardashians were throwing for him, it was reported that the reason Blac wasn’t invited was because her and Rob had broken up. Now a source tells People that the pair are still technically together, but that they’re in a bad place. “Rob and Chyna are not in a great place. They are always up and down, but they went through a very rough patch as recently as last week. They weren’t speaking, or even texting. They’re not broken up, but it’s not a healthy relationship at all.”

4. James Corden couldn’t help himself but perform with the Backstreet Boys, and can you blame him? It’s like IRL karaoke. EPIC.

20 years ago tonight #sabrinatheTeenageWitch aired on @abcnetwork for the first time and changed my life forever! What was your favorite episode? Happy anniversary to my crew, cast and fans and especially to my amazing executive producer who created the show and also happens to be my mommy!! @paulajhart56 #20yearsflewby

5. Melissa Joan Hart posted the BEST throwback to celebrate Sabrina the Teenage Witch‘s anniversary. Can you believe it’s been 20 years since this show premiered? Its star can’t either, and she posted an amazing meme to celebrate the occasion. “Twenty years ago tonight #sabrinatheTeenageWitch aired on @abcnetwork for the first time and changed my life forever!,” she wrote. “What was your favorite episode? Happy anniversary to my crew, cast and fans and especially to my amazing executive producer who created the show and also happens to be my mommy!!@paulajhart56#20yearsflewby.”

6. Quote of the day: “Have I spoken up? I had to take a look at me. What about my nephews? What if I have a son and what about my daughters? As Dr. Martin Luther King said, ‘There comes a time when silence is betrayal.’ I. Won’t. Be. Silent.” Serena Williams penned a powerful statement saying she fears for her nephew’s safety after the most recent killing of black men by police officers in the United States.

Do you think more celebrities should speak up about important issues like this? Let us know on Twitter @BritandCo.