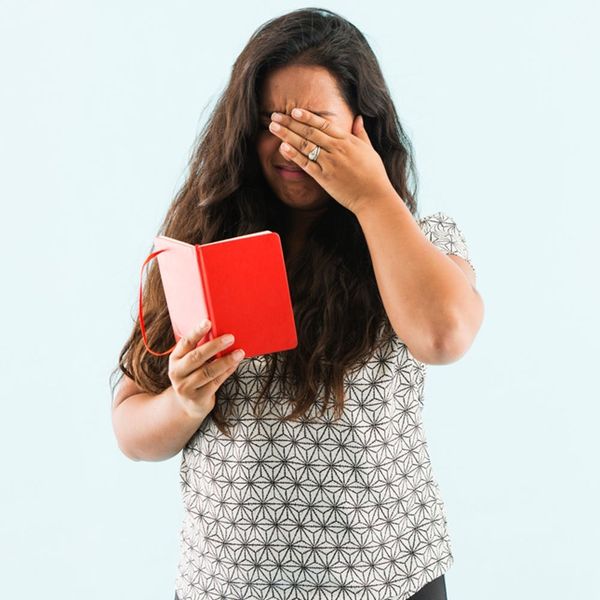 I’m reading my diary to a man I’ve never met.

The entry is about a harrowing teen crush and recounts, among other things, how, months after we broke up, he asked me for a ride to a Depeche Mode concert. Still pining for him, I imagined a communion reunion to the strains of “Personal Jesus.” What I didn’t expect? For him to be waiting at the curb with his new girlfriend.

So, yeah, when I wrote these words in 1994, I never thought I’d be sharing them. Much less while sitting at my desk in California, thousands of miles from the Chicago suburb where I first penned them, in a house I share with my husband and two sons.

But Neil Katcher, the guy on the other end of the phone, listens and laughs — I think he even “ugh”s — in the right, painful places. He’s used to this.

Katcher is the executive producer of Mortified, a grassroots storytelling project that launched in 2002. Now a stage show in 10 cities, where performers dig up their real-life adolescent writings and share them in front of a live audience, Mortified has evolved into a multimedia phenomenon: There’s a book, a TV show, a film and a weekly podcast. (Download it or subscribe here or via iTunes.)

Each show is packed with laughs because, yes, it’s finally okay to laugh. As performer Jimmy Radosta puts it, “People are on stage, exposing this dark period of their life but standing there as fully formed, well-adjusted adults… It’s cathartic to laugh off these toxic memories and it’s also really entertaining.”

I think it’s true for a lot of us that those teen years are the last few of childhood where we might almost fully live in the moment. But sadly, a lot of the moments kind of suck.

There’s a relief in knowing that someone gets it. And there’s some kind of processing that happens by dredging up this stuff and having someone say, “Oh my god, that’s hilarious.”

“No one [performs at Mortified] when they’re still in the moment of absolute and utter teenageness,” said Erin Potter, 34, a blogger and Mortified performer from Portland, Ore. “So you now can see the humor in it. And hearing people laugh in the places you know are funny, you just light up.”

Potter’s diary story is unique: During a very rough time in her family life that got so difficult she ran away from home, Potter learned her dad and stepmom were reading her diary. So she began to pen fake entries. They’re laugh-out-loud funny but not printable here. (From the true section, Potter talks about fronting a band and finding two not-as-pretty girls as bandmates, so that she’ll look hotter. Yes, she’s very relatable and hilarious.)

For her, doing Mortified was a baby step toward considering stand-up comedy, but basking in the glow of laughter gave her something else, too. “It was like learning I had comrades in the darkness.” (Though the darkness now has given way to a good relationship with her dad, who’s grandfather to Potter’s young son.)

Still, how many people really want to put everything out there? It turns out, a lot. And getting the laughs of comrades is the reason why.

“One of the key things is that when the audience is laughing, they are laughing because they recognize that kid or what that kid felt like,” said Katcher.

Katcher started his career with Mortified from the very first show, because he had a video camera and creator Dave Nadelberg needed someone to film him as he went on stage in Los Angeles to read a letter he’d unearthed: As a teen, he wrote to a crush detailing, in a polite and salesman-like manner, why she should go out with him. He never sent the letter, but years later that unrequited love took shape as the first-ever mortified show.

“It was supposed to be a one-time thing,” Katcher said. But it turned out plenty of people had saved plenty of things and wanted to share.

Katcher himself has also performed a series of heavily vengeful poems directed at a senior-year crush who went to prom with someone else. (Katcher didn’t even ask her.)

“It’s nice to be able to laugh at what was traumatic. And it’s also fun to look back to see things we were so passionate about and opinions about how the world was supposed to work that were so off,” he said.

Though one cliche teenage-ish belief — that the guy on stage gets the girl — did work out for Katcher. He met his wife through the show, when she approached him after his reading. (They’re featured in the film Mortified Nation, and are quite adorable. It’s currently streaming on Netflix.)

She thought he seemed really cool, to be doing what he did. There’s a sweet irony to that, no?

And, from my own experiences enjoying other people’s Mortified tales, I have always walked away thinking, “Wow, if I knew those people in high school, maybe it wouldn’t have sucked so much.”

But what happens as you listen is you figure out that you DID know those people in high school. It’s just that all of you were so busy hiding that real stuff that you never met.

Jimmy Radosta as a teen.

“I was blown away by how powerful the experience was,” Radosta said, of seeing a Mortified show. Radosta, 37, is a reproductive rights activist in Portland, Oregon, but until 2009 worked as a journalist.

“Because I did aspire to be a journalist, my journals had a level of detail — transcribing conversations, documenting daily embarrassments — that other people might not have,” he said.

And while they have their funny moments now, Radosta said they were not fun to write at the time: “I was suicidal and unsure about who I was,” he said. “I didn’t know anyone who was openly gay, so even in my own journal I was lying to myself about who I was attracted to.”

In some entries, he’s writing about a crush on a girl that he’s laboriously trying to believe is real. But his on-stage story “ends” at a high point, where he goes out dancing with two classmates and we sense he might finally be coming into his own.

“It was good for me to revisit a dark period in my life and have a good laugh about it,” he said. “Ultimately, our teenage drama is short-lived but we don’t have the long view that this too shall pass.”

But still, for me, someone who’s never even done conventional therapy, the idea of putting on full display my most conflicted, bratty, self-pitying and navel-gazing moments causes me to shudder.

When I finish reading my journal entry to Katcher, he pauses to digest my adolescent palaver and offers up his assessment. After listening to so many teenage pinings and pennings, he’s like some kind of John Hughes-ian messiah, or at least that really cool older cousin who goes to school in another town so you can totally tell him your weird stuff.

He thinks I really worried about this bad-boy crush of mine ruining his life — maybe some kind of guilt due to my own, less-troubled background — by dating this new girl, who I describe as “Gia, of the ever-changing hair color.” He also notes that maybe I had some deep-seated envy or longing to be like this wild girl, to say, “hey, I might not dye my hair every week, but I’m not boring!”

Yeah. It’s pretty accurate. And some of those insecure traits still reside in me, which Katcher points out is another part of Mortified’s appeal. “Even though we’ve moved on,” he said, “It’s still us.”

What was your most mortifying experience? Share with us in the comments below!

Iva-Marie Palmer
Based in Los Angeles, Iva-Marie Palmer is the author of several young adult books, including The End of the World As We Know It.
Lifestyle