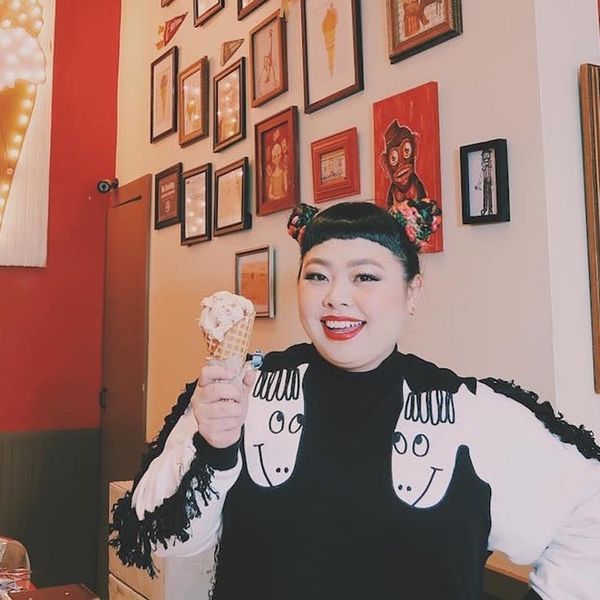 The body positivity movement has gained major traction in the past couple of years (even Barbie has gotten a more inclusive makeover) but, as yogi Jessamyn Stanley recently told us, in a lot of ways, it still has a long way to go.

Naomi Watanabe’s name has been in the body positivity conversation in her home of Japan for longer than we even knew it was called that — almost a decade ago, she rose to fame for her Beyoncé lip syncs, and now she’s a bona fide social media queen, in-demand comedian, and successful fashion designer who counts Lena Dunham among her fans.

At 220 pounds, 29-year-old Watanabe is challenging not only the one-size fashion options in Japan, but her — and the world’s — perception of plus-size women, which she says starts with yourself.

“Rather than trying to change other people’s minds, I would like to help change the minds of bigger women, to help them feel good about themselves,” she told the Washington Post in February.

Slapstick comedy is one of Watanabe’s specialties, but her confidence is anything but a novelty. Her Instagram posts, as colorful and quirky as her personality, are full of self-aware jokes about her “unconventional” appearance: One post from last September even featured a close-up of a typically taboo image — a scale — taken in Italy. “Did I eat too much pizza?” her caption read, showing the scale at 100kg (220lbs). “I believe I weighed 45kg before I came to Milan.”

Even her beauty tutorials, which result in a flawlessly done face, are loaded with laughs thanks to Watanabe’s warm and easy sense of humor — she’s quick to make fun of her own filthy makeup containers (OMG same) or pull her face into a goofy expression. Her refusal to take herself too seriously is as refreshing as it is inspirational (see: her interruption of the favorite cutesy animal filter on Snapchat with a hoarse cough).

Watanabe’s film and TV work, including her upcoming TV show Kanna San! is still largely available for Japanese audiences, but as the entertainment, fashion, and beauty worlds become increasingly inclusive of ALL body shapes and sizes, we’ll still be looking to her growing global social media presence as not only an early game-changer, but the new norm.

What do you think of Naomi Watanabe’s hilarious social media game? Let us know @BritandCo!