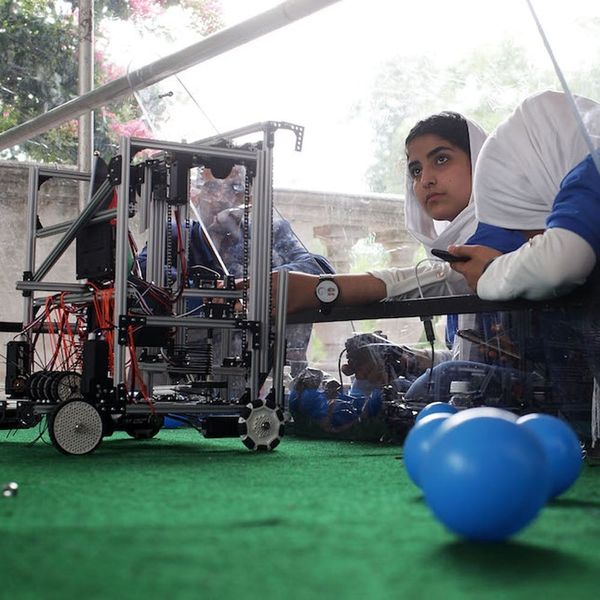 A group of high school students from Afghanistan made headlines last month when they were denied US travel visas to compete in an international robotics competition in Washington DC. At the last minute, after an outpouring of public and political pressure, the six girls were granted last-minute approval and were able to compete in the FIRST Global Challenge in what was seen as a huge victory for girls in STEM. Yesterday, they won silver in “courageous achievement” at the competition.

Team Afghanistan was brought together by technology entrepreneur Roya Mahboob, the co-founder and CEO of the Digital Citizen Fund. Together, the girls built a ball-sorting robot under intense time and material constraints — many of their materials were held up in customs for months, according to Forbes, and they ended up building it in just two weeks.

While the exact reason for the girls’ visa troubles is unknown and confidential, according to Time, their final permission into the country came from an unexpected place: President Donald Trump. But before Trump intervened at the last minute to allow the girls to travel to Washington, Amsterdam’s World Summit AI had already extended an invitation for the girls to appear at their conference in the fall.

“We knew right away that we had to bring them to Amsterdam,” Sarah Porter, CEO and Founder of WSAI tells Brit + Co in an email. “Not only because of the hard work, dedication, and ingenuity these girls have shown, but because as a female entrepreneur and mother, the empowerment of women is extremely important to me.”

Porter goes on to say that “inclusion and diversity are core elements in achieving a truly global community.” She adds, “Individuals like the girls’ robotics team who have the vision needed to become genuine change-makers and future leaders deserve a platform where they can showcase their talent.”

In Washington, the Afghan robotics team was swarmed with attention from the media and their fellow competitors, and while they didn’t place in the top three overall rankings, they served as an inspiration to all of the participating teams — and earned an experience worth even more than a medal.

What do you think of the all-girl robotics team’s story? Let us know @BritandCo!