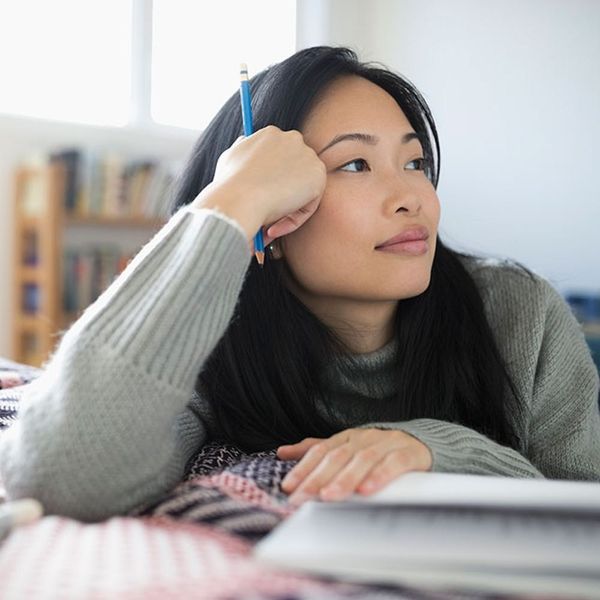 If you’ve noticed that you tend to focus on the negative in your life, you’re definitely not alone. In fact, human beings are biologically predisposed toward negative thinking. In his book, Hardwiring Happiness: The New Brain Science of Contentment, Calm, and Confidence ($16), Dr. Rick Hanson, psychologist and senior fellow of the Greater Good Science Center at UC Berkeley, addresses the psychological concept of negativity bias: The idea that our brains are hardwired for negativity. The good news is that Hanson and other researchers believe it’s possible to rewire the brain, promoting positive thinking and gratitude rather than anxiety and worry.

What Is The Negativity Bias?

The aptly named “negativity bias” is a well-studied concept in psychology. Negativity bias is more theory than fact, but research has shown that there’s a propensity toward negative over positive beliefs in both humans and the animal kingdom at large.

There are a lot of theories as to why this is, but the most predominant one is that negativity bias evolved to help us avoid danger. By reacting more strongly to negative stimuli than positive ones, we can stay out of harm’s way and will take fewer risks when there’s a threat of a negative experience. This was extremely useful in prehistoric times; it helped people remain vigilant in the presence of predators and other threats to their actual physical safety. Unfortunately, in the modern world, our natural tendency to hone in on the bad in situations can be more of a hindrance than a help.

The Effect of Negativity on Us

Regardless of why it exists, the negativity bias can have implications for our mental health. People tend to weigh negative outcomes more heavily than favorable ones, which essentially results in an underlying sense of fear. Studies have even shown a strong correlation between one’s negativity bias and the likelihood of anxiety and depression.

Of course, the natural next question is: How can we overcome this tendency toward negativity? Because we are hardwired to respond with fear to any potential negative outcome, we often feel inundated with anxiety, especially in the age of the internet and information overload. The good news is that there may be mental tools and techniques we can use to strengthen our ability to think more positively. That’s where Dr. Hanson’s book comes in.

Hanson, and many other scientists, have long touted the benefits of gratitude for mental health. In an article in The Atlantic, Hanson explained that by “taking in the good,” we can strengthen the neurological pathways in our brains that fire up when we’re happy. “It’s really important to have positive experiences of these things that we want to grow [happiness, resilience, love, confidence, etc.], and then really help them sink in, because if we don’t help them sink in, they don’t become neural structure very effectively,” he said in the article.

As well, studies have shown a strong relationship between practices like counting blessings or gratitude journaling and greater feelings of well-being. So while we may have an uphill battle when it comes to being more positive, it is possible to create a happier, healthier brain.

Have you tried gratitude journaling? Tweet us at @BritandCo and let us know!

From Your Site Articles
Maggie McCracken
Maggie McCracken is a freelance writer, blogger and aspiring digital nomad. She writes primarily about food, travel, yoga and healthy living, and she has a background in health and science journalism. You can read more of her work on her lifestyle and travel blog, The Olive Branch.
Mental Health
Health
Mental Health Self Self Care
More From Health