10 Netflix Originals That Will Take You Back in Time 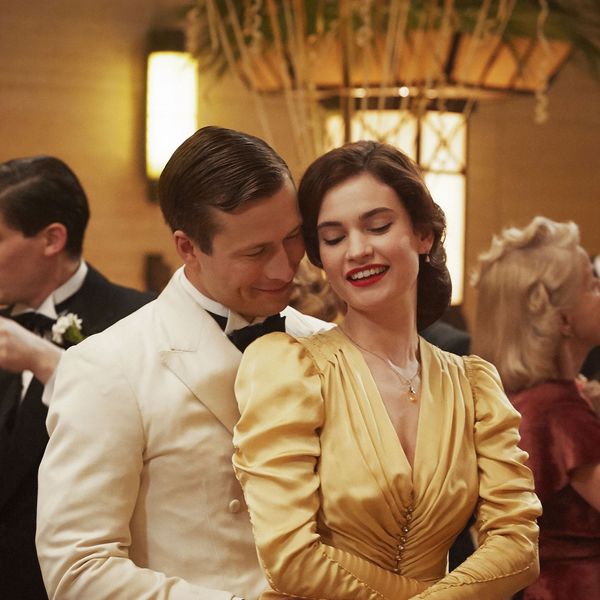 Modern life can be exhausting. But one of its considerable perks is access to Netflix, which has a seemingly endless library of movies and TV shows — including several original titles that will whisk you back in time and make you forget (or in some cases appreciate) your 21st-century problems. Whether you prefer ancient history or decades more recently gone by, there's a period piece for everyone. (Photos via Netflix)

Stranger Things: Stranger Things isn't just set in the 1980s; it's also modeled stylistically after the sci-fi/fantasy movies that were so popular at the time. Every detail — from the clothes the characters wear to the pop culture touchstones they reference — is perfectly in line with the retro era. The nostalgic callbacks are so spot-on that sometimes it's hard to believe the show wasn't actually filmed in the '80s.

The Duffer brothers, who created the series, wanted it to feel like a relic of those times. "[Stranger Things] allows us to also pay homage to the films we grew up on," Matt Duffer told Variety in 2016. His brother Ross Duffer added, "Why we loved this stuff so much is because these movies and books were about very ordinary people we could relate to, that we understood. We're like, oh, that's like my mom and that’s like my friend and that person is like me, even though they would encounter these amazing things. That was always our favorite type of story, and that's the stuff we fell in love with. The peak of those type of ordinary-meets-extraordinary stories was in the '80s." (Photo via Jackson Lee Davis/Netflix)

GLOW: Inspired by the real-life Gorgeous Ladies of Wrestling show from the 1980s, GLOW is a treasure trove of mile-high hair, blue eyeliner, spandex, and stellar songs like "Invincible" by Pat Benatar, "We Don't Get Along" by The Go-Go's, and "The Look" by Roxette. It also touches on some very topical issues of the era, such as sexism, racism, and inequality.

"[Co-creator] Carly [Mensch] always says this — I'm attributing it to her even though I'm saying it — I feel like we're writers with very modern brains but I think we're also very committed to really honoring the period," co-creator Liz Flahive told Gothamist of the series, which features an ensemble cast of badass women. "So I think we don't want to do anything that is distracting in any way, but I think that our hope is that it doesn't just live as a sort of nostalgic thing that you're watching. I think it wants to, ideally, bump up against the times we're living in a way that makes you think.” (Photo via Erica Parise/Netflix)

The Crown: The Crown, which centers around Queen Elizabeth II, spans several decades of the British monarch's life and reign, beginning in the 1940s, when the then-princess stepped up to the throne at just 25 years old following the death of her father, King George VI. Over the course of the first two seasons, we've seen her marriage to Prince Philip, the births of her four children, and the ups and downs of her earliest years as queen.

Claire Foy plays Elizabeth in these first two seasons, alongside Matt Smith as Prince Philip and Vanessa Kirby as Princess Margaret. However, for the third and fourth seasons — which will reportedly cover the 1960s, '70s, and '80s — Olivia Colman will take over as the queen, Tobias Menzies will play Prince Philip, and Helena Bonham Carter will step in as Princess Margaret. (Photo via Robert Viglasky/Netflix)

Mindhunter: Criminal profiling is a pretty well-established field now, but back in the 1970s — when this series takes place — it was relatively new to the FBI. Mindhunter follows agents Holden Ford (Jonathan Groff) and Bill Tench (Holt McCallany) as they interview imprisoned murderers like Ed Kemper (Cameron Britton) to try to solve ongoing cases. (Photo via Patrick Harbron/Netflix)

Everything Sucks!: In this quirky parody of '90s teen culture, a group of high school outcasts join the A/V club and decide to make a movie with the kids from drama club in order to get noticed. Fun fact: Everything Sucks! is set in the town of Boring, Oregon, which is a real place and a sister community to both Dull, Scotland, and Bland Shire, Australia. (Photo via Scott Patrick Green/Netflix)

The Get Down: The Get Down, from Moulin Rouge director Baz Luhrmann, chronicles the rise of hip-hop and disco in the 1970s, as experienced by a group of teens in the Bronx. In order to keep things as true to the era as possible, Luhrmann collaborated on the series with Oscar winner Catherine Martin, legendary MC Nas, Grandmaster Flash, Pulitzer Prize-winning playwright Stephen Adly Guirgis, and hip-hop historian Nelson George. (Photo via Netflix)

Narcos & Narcos: Mexico: In Narcos, Netflix explores the life and crimes of infamous Colombian drug lord Pablo Escobar. The series starts in the late 1970s, when Escobar first began manufacturing cocaine, then continues into the '80s and '90s.

In July 2018, Netflix announced that the fourth season of the show would be reimagined as Narcos: Mexico, which will follow the dealings of the Guadalajara cartel in the 1980s. (Photo via Juan Pablo Gutierrez/Netflix)

The Guernsey Literary and Potato Peel Pie Society: Lily James stars in this 1940s period drama about a young writer who travels to the island of Guernsey after exchanging letters with one of its residents regarding a book club he and his friends started during the German occupation of World War II. It's a lovely, cozy film, and the era-appropriate fashion is just divine. (Photo via Kerry Brown/Netflix)

Wormwood: In 1953, a CIA employee named Frank Olson died when he fell from the window of his New York City hotel room. While it was initially ruled a suicide, a 1975 report linked Olson's death to a top-secret experiment and government biological warfare program. The report indicated that Olson had been dosed with LSD by his CIA supervisor as part of Project MKUltra just nine days before dying. In Wormwood, Oscar-winning filmmaker Errol Morris follows Olson's son, Eric, on his decades-long hunt for answers regarding his father's death. (Photo via Zach Dilgard/Netflix)

Desiree O
Desirée O is a ‘Professional Bohemian’ who loves anything and everything related to the arts, entertainment, and pop culture. She ADORES being a ‘Newsy’ for Brit + Co, covering all of the latest tidbits of awesomeness that you want to read about. When she’s not writing, she’s either making messy art, going on long adventurous walks with her camera, or poking around over at bohemianizm (http://www.bohemianizm.com/). You can find out about Desirée O and her work at http://DesireeO.com/ or follow her on Twitter @DesireeO.
Movies
Streaming
Movies Netflix Streaming TV
More From Streaming