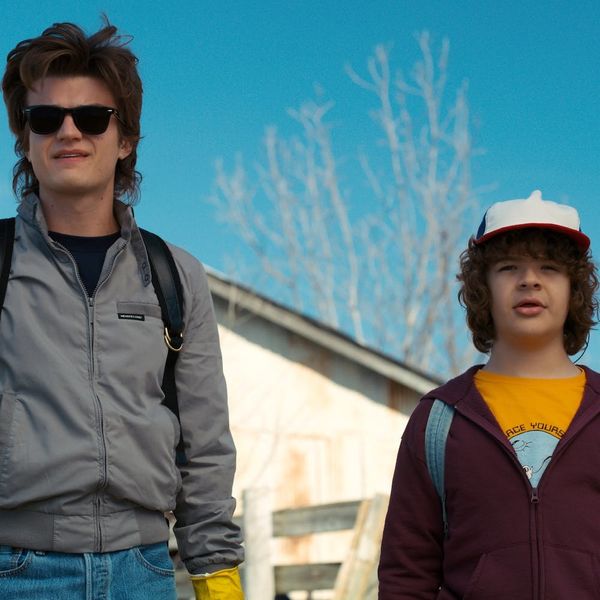 The ’80s nostalgia is strong with this one! Netflix just released a sneak peek of Stranger Things season 3 in the form of a commercial for Hawkins’ brand-new shopping center. And along with a few stores you definitely cruised in your youth, it features Steve (Joe Keery) taking a break from fighting terrifying creatures from the Upside Down to work in the food court.

“Coming to Hawkins in the summer of 1985…the Starcourt Mall! Starcourt Mall will be one of the finest shopping facilities in America and beyond with options for the entire family,” Netflix captioned the teaser on YouTube.

In the video, we see all that the mall will offer, from The Gap and Waldenbooks to Sam Goody and Claire’s. Our favorite business has to be Scoops Ahoy Ice Cream Shop, though, because that’s where Steve is. He shows up behind the counter in the commercial to give us a somewhat awkward “Ahoy!” He’s joined by Robin (Maya Hawke), and both are decked out in snazzy sailor outfits — complete with hats that can barely contain Steve’s epic hair.

We can only guess that this is Steve’s post-high school plan, as he made it clear last season that he wouldn’t be headed to college after graduation. Executive producer Shawn Levy toldThe Hollywood Reporter back in March that Steve will also be keeping up his friendship with Dustin (Gaten Matarazzo). “I’ll just say we won’t be abandoning the Dad Steve magic,” Levey said. “I don’t want to say much more, but I literally feel that we were walking along and we stumbled onto a gold mine with Dad Steve.”

The second season of Stranger Things recently earned five Emmy nominations, including nods for both Millie Bobby Brown and David Harbour. And while season 3’s premiere date hasn’t been announced yet, you can watch the first two seasons on Netflix now.

Are you excited for Season 3 of Stranger Things? Let us know @BritandCo!

Desiree O
Desirée O is a ‘Professional Bohemian’ who loves anything and everything related to the arts, entertainment, and pop culture. She ADORES being a ‘Newsy’ for Brit + Co, covering all of the latest tidbits of awesomeness that you want to read about. When she’s not writing, she’s either making messy art, going on long adventurous walks with her camera, or poking around over at bohemianizm (http://www.bohemianizm.com/). You can find out about Desirée O and her work at http://DesireeO.com/ or follow her on Twitter @DesireeO.
Netflix
TV
Netflix Streaming TV