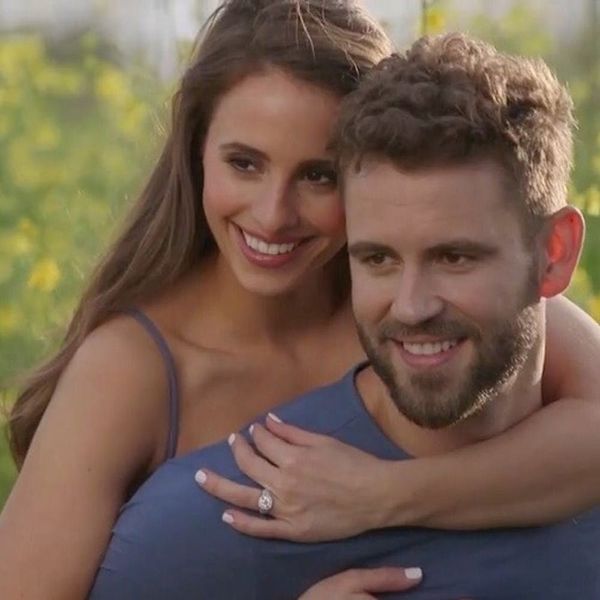 Ever since The Bachelor’s Nick Viall gave Vanessa Grimaldi her (recycled) engagement ring, fans of the show have been questioning the validity of their relationship. Many have observed that the pair don’t give off the vibes of a couple who are truly, madly, and deeply in love. That’s why the duo may be taking a few extra steps to prove to the world that they are indeed into each other (despite also claiming that it’s too early to actually get married despite, ya know, being engaged). However, a DWTS make-out session, surely meant to show off the spark between them, ended up being just kinda… well, awkward.

In the clip from TMZ showing Viall rehearsing to Ed Sheeran’s “Shape of You,” a shirtless Nick spins away from his partner, Peta Murgatroyd, and shuffles across the stage to where his fiancée sits and watches him. Reaching out his arm, he sweeps her into the obviously rehearsed moves before WHAMO! Smoocherama city! Seriously, these two just go at it. And it is a little uncomfy to watch.

As awkward as the rest of their reality TV-based relationship, this moment is definitely over the top. The pats on her bum? Eep!

It looks like Viall’s dancing isn’t the only thing that needs a little finessing.

How much longer do you think Nick Viall and Vanessa Grimaldi will last? Or do you think they’re truly meant to be together? Let us know @BritandCo!

Desiree O
Desirée O is a ‘Professional Bohemian’ who loves anything and everything related to the arts, entertainment, and pop culture. She ADORES being a ‘Newsy’ for Brit + Co, covering all of the latest tidbits of awesomeness that you want to read about. When she’s not writing, she’s either making messy art, going on long adventurous walks with her camera, or poking around over at bohemianizm (http://www.bohemianizm.com/). You can find out about Desirée O and her work at http://DesireeO.com/ or follow her on Twitter @DesireeO.
the bachelor
Pop Culture
the bachelor