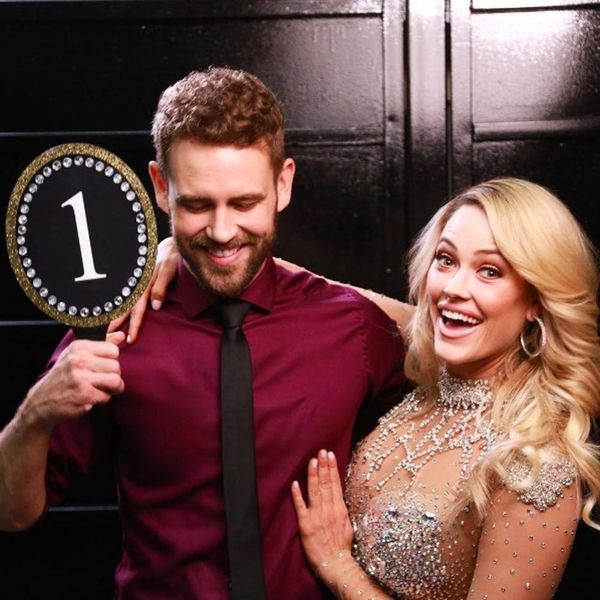 Nick Viall’s season of The Bachelor gave us plenty of juicy moments (including ones that you didn’t see), but now that the (recycled) engagement ring has been given to Vanessa Grimaldi, the couple is trying to get to know each other IRL. That’s why, as Viall gets ready to take a spin on Dancing With the Stars, the reality shows’ worlds have collided in the most romantic way.

Viall and Grimaldi first spent a night out with fellow Bachelor Nation couple Ben Higgins and Lauren Bushnell, and they’re proving they’re all about the double dates by stepping out for some fun with Nick’s DWTS partner, Peta Murgatroyd, and her hubby, Maksim Chmerkovskiy.

Spending Saturday night at The Church Key in West Hollywood, the group shared a round of smiles while each couple held hands adoringly. All dressed casually (expect for Murgatroyd, who took things up a notch by slaying a beautiful blue piece), they were certainly camera-ready when people popped up to take a pic.

@petamurgatroyd and @nickviall are a match made in #DWTS ballroom heaven! Don't miss their first dance together THIS MONDAY! #TeamBabyGotBach

Surely a temporary break from practicing for the DWTS’ season 24 premiere tonight (Monday, March 20), we certainly hope Peta and Nick packed in the energy-giving eats to prep them for their big opening number.

Who are your fave friends to enjoy a double date with? Let us know @BritandCo!