5 of Nicki Minaj’s EMAs Outfits You Could Wear to a Holiday Party. No, Really. 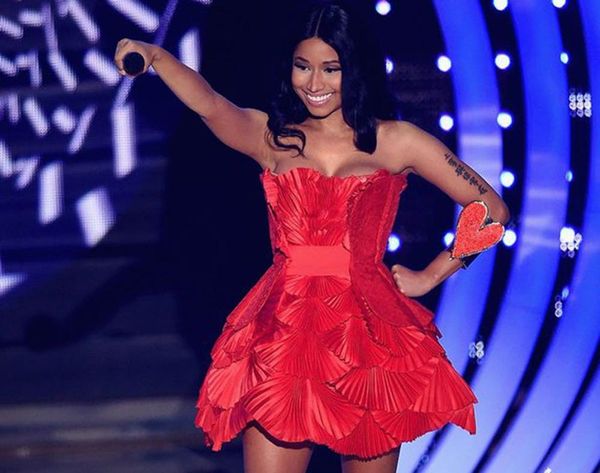 In typical MTV fashion, last night’s EMAs were an even mix of entertainment and honoring some of today’s top pop acts. Who better to take us on that journey than the one and only, Nicki Minaj? As you may have guessed, the hip hop powerhouse kept folks on their toes throughout the entire award show. Minaj gave the entire audience free drinks, took home the award for best hip hop artist and underwent nearly 10 wardrobe changes. Never one to shy from a head-turning look, Minaj’s outfits were just as wild and crazy as always. While they might be a bit much to sport on the street, a subtler version of these sartorial stunners would look totally gorgeous at that upcoming holiday party. Here are five of Nicki’s coolest looks from this weekend’s awards show translated for the real world.

1. Drama Rama: You have to give it to her, Nicki sure does know how to make an entrance. The hip hop powerhouse made her hosting debut by repelling down from the ceiling in a dress with a 14-foot train. Obviously, while it’d be awesome to rock this dress in its entirety, it probably isn’t so practical for a festive fête – unless you want to double as the table runner. Instead, try this Nicole Miller dress that you can borrow from Rent the Runway for just $40.

2. Lady in Red: Holiday party here you come. Nicki sported this crimson number as she performed an impromptu, acappella rap dedicated to Scotland (where the award ceremony was held). Translate her look into this BCBG piece ($91) that’s similar in color and cut, but substitutes those wild accordion details for classic lace.

3. No Fear Sheer: Compared to her opening outfit, this piece looks like standard street wear. While it’s not too crazy, that plunging neckline might be a bit much for some. If you’re not feeling like baring it all this holiday season, try this cut-out dress ($108) that still draws attention to your neckline, but in a slightly less revealing way.

4. Optical Illusion: Minaj had the audience captivated during one of her performances not only because of her serious vocal chops, but also because of this crazy, eye-catching number. Keep that psychedelic print, but tone down the drama with this slim cut mini-dress ($66). If price is no object, go for this minimalistic Kenzo dress ($616) that has almost the exact same pattern.

5. Classy in White: This was definitely one of Nicki’s tamer looks, but might still be a bit much for a semi-formal holiday party. Keep the long sleeve + lace combo with this affordable piece ($32 USD). If you’re still really wanting that accordion detailing, throw on a midi-length accordion skirt over this number. Nobody will ever know your “top” is actually a dress.

What was your favorite look from the EMAs? Share a picture or link with us in the comments below.

Cortney Clift
Cortney is the senior writer and special projects editor at Brit + Co. She typically covers topics related to women's issues, politics, and lifestyle. When she's not buried behind her computer you'll find her exploring New York City or planning her next big adventure.
Celebrity Style
Fashion
Celebrity Style