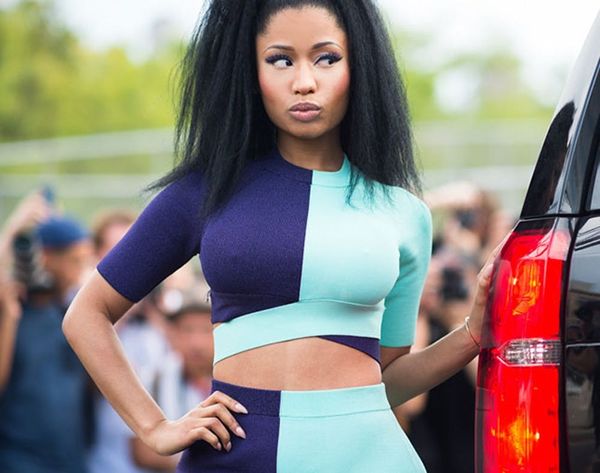 We’ve come to expect the unexpected from New York Fashion Week, from jaw-dropping runway moments (Ralph Lauren’s 4D fashion show made us freak) to the innovative accessories that create just as much buzz as style bloggers make watching them walk by from the front row. And then of course, there are the facepalms, the caught-on-camera #fails and the WTF moments that, whether candid or painstakingly planned, keep us from taking this celebration of fashion too seriously. This year, there’s been plenty of the latter set, and we’re featuring everything offbeat and outrageous to hit Lincoln Center these past few days right here. ICYMI — the 10 most head-scratching scenes from NYFW so far.

1. Confirmed: Miley’s DIYs will hit the runway: When Miley wasn’t busy twerking this summer, she was DIY-ing THE most bonkers crafts we’ve ever seen. Just what the hot-glued tchotchkes would be used for (besides being Instagram gold, please see below) was beyond us until it was announced they’d be worn by models during Jeremy Scott’s NYFW show.

Since Scott was tapped to design some of Miley’s outrageous stage costumes for her Bangerz tour, the move to spotlight Miley’s creations doesn’t come as a total surprise, but how exactly they’re styled on his models will. You won’t need to keep your eyes peeled for these pieces when they hit the runway later today — we’re just hoping for a foam finger-free show.

2. Rashida Jones, Karlie Kloss + Elle Fanning put on a play for Opening Ceremony: What’s even more impressive than filling your fashion show’s front row full of A-listers? The answer: Having celebs write, direct and star in said show. That’s exactly what Opening Ceremony pulled this past Sunday, presenting a star-studded one-act play in lieu of a traditional catwalk. The industry satire, titled 100% Lost Cotton was written by Jonah Hill, directed by Spike Jones and performed by a cast that included Rashida Jones as a fashion mag editor, and Elle Fanning as one of those girls who credits her fame to “when really important people stare at you to get ideas.” Obvs, the spectacle concluded with a song-and-dance number that had Karlie Kloss belting her heart out.

3. Nicki Minaj tried to teach models to twerk: Sure models can strut like no one’s business. But when it comes to shakin’ booty, these gals fall short — and that’s even when they’re instructed by the master of bouncing buns, Nicki Minaj. Watch and LOL as these muses try (and fail) to twerk to Nicki’s outrageous single “Anaconda” (and don’t lie… you’re gonna try to trump these models at home!).

4. But they nailed this conga line: If there was any doubt that Nanette Lapore didn’t know how to have fun in the sun (like her breezy, feminine frocks couldn’t convey that vibe on their own), she proved it with her non-traditional finale that had models cha-cha-ing down the catwalk. You kind of wish you could jump in there, right?

5. There were two jaw-dropping model cameos: The one. The only. Nai-o-mi wearing Dianne von Furstenberg. Bow down. Praise hands. ***Flawless. Oh, and this guy — Brooklyn artist David Yellin closing down the Misha Nonoo show with venti iced latte in hand. #lookingood

6. Ew. Cara D got a bacon tattoo on her foot: We’ve had our fair share of tattoo envy before. This is not one of those times. Yes folks, this foot belongs to Cara Delevingne, who, as you can see, got the word (or the scent? or the idea of?) “Bacon…” inked on the bottom of her foot.

7. The runways are officially dog-friendly: No, we’re not gawking over that gigantic lucite collar, those (kind of amazing) smiley/sad face thigh tattoos, or the denim-on-denim ensemble that includes shorts with thigh-high slits for a dude. We’re ogling that adorable great dane trotting down the runway. Really, that’s all.

8. Tim Gunn got Iced: As in the ALS Ice Bucket Challenge (not the throwback drinking challenge — though that would be a sight!), doused by fellow Project Runway host Heidi Klum. The moments that happen next might truly be Tim Gunn’s truest make it work moment.

9. Kate Spade wants you to carry a snail: From purses that look like takeout boxes to cross body bags in the shape of 45s, Kate Spade’s carryalls have always been fairy tale-levels of whimsical. This year her bags are just as kooky, with the most stand-out from her garden party themed show being this wicker snail clutch. We think it could totally work with the right dress (and right mani, like the sleek nail art above), but what do you think: so cute or kinda crazy?

10. Mary Kate and Ashley don’t understand Vine: So your bestie whips out her smart phone, hollers “over here!” and you strike a pose to rival that of your most favorited selfie only to find out she’s *actually* been filming (thanks, girl). It counts as a top awkward moment for even the most practiced of models, including the Olsen Twins. In the Vine above, you can count the cringeworthy beats till MK + A’s ohh-wait-it’s-a-video revelation, but the girls never falter from their stone-faced poses. Touché.

What are your most talked-about moments from NYFW — the good, the bad, the WTF-worthy? Tell us in the comments below.