*NSYNC Reunited to Celebrate Their Hollywood Walk of Fame Star — See the Pics! 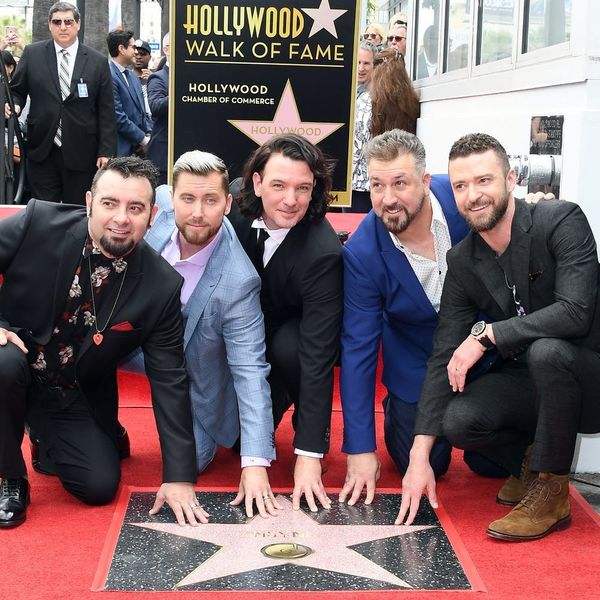 Ellen DeGeneres introduced the group, describing the five former boy banders as “the cute one, the bad boy, the sensitive one, the sexy one, and Joey.”

She went on to poke fun at their music, including their 2001 single “Pop,” from Celebrity. “There is a reason that you’re being honored today — your music is the soundtrack to an entire generation,” she said, to wild cheers from the fans who’d gathered in hopes of seeing the group. “Your lyrics inspire me every day. Listen to these lyrics, please. ‘Dirty pop, baby, bet you can’t stop / I know you / Like this dirty pop / This must be pop.’ It’s like you took the emotions out of my heart and you spoke them out loud.”

Carson Daly, who spent a lot of time with the boy band on MTV’s TRL, also spoke at the ceremony. “Being a VJ from 1997 to 2003, I got to experience a lot of cool things — interviewing Michael Jackson, giving U2 a Grammy — but perhaps my greatest achievement occurred back in 1998, when a boy band came to the US, hot off the charts in Europe, and landed on our MTV doorsteps in Times Square,” he began, before listing some of the group’s many accomplishments.

“I was the lucky one. I got to be a part of history as America met and fell in love with *NSYNC for the very first time on US television,” he continued. “The year 2000 was a weird but magical time. We all survived Y2K, and TRL was jam-packed every day with screaming teenagers much like this. … But no fans during my time at MTV were more loyal and fanatic than you, the *NSYNC fans. … I was one of the very lucky people who got to hang with these guys when the entire world wanted to hang with them.”

After Daly’s speech, all five members of *NSYNC took the stage to receive their star. Chasez spoke first, thanking everyone who worked for and with the group — including his bandmates, for “making [his] dreams come true.” Kirkpatrick stepped up second, acknowledging their families (especially his mom, sisters, wife, and son) and calling his bandmates “some of the best uncles” his son could ever hope to have.

Bass echoed Kirkpatrick’s sentiment, saying, “I want to thank these four guys. … We’re brothers, we’re family, and out of all of this — the music, the tours, the love from the fans — it’s my brotherhood with you guys that I’m most thankful for.” He also spoke about his coming out, explaining that he stayed quiet about his sexuality because he feared it would jeopardize the group. “So many nights on stage, I’d see young gay fans singing their hearts out, and I wanted so badly to let you know, I was you. I just didn’t have the strength then,” he said. “But I do today, so let me say loud and proud to all of my LGBTQ brothers and sisters who embrace me and show me the way to be who I am, thank you so much.”

Fatone spoke fourth, thanking his bandmates, his family, and — of course — the fans. “It’s amazing that we haven’t had an album in years and you guys are still supporting us to this day,” he marveled.

Last but not least, Timberlake took the podium. “This is so surreal. You guys are the best fans in the world. … This really means the world to all of us,” he began. “These four guys mean so much to me. We’re really a family, and the memories that we have and the times that we’ve shared and the families that we’ve built from it — I don’t really think I can put into words how much the four of you mean to me. … I just love all of you so much.”

He also gave a special shout-out to their moms, the “real MVPs,” and his wife, Jessica Biel. He ended with this tease: “I love these four guys. We’ve had an incredible ride, and I can’t wait to see what the future holds.”

*NSYNC’s star — which can be found near the stars for New Kids on the Block, the Backstreet Boys, and Boys II Men — is the 2,636th star on the Walk of Fame.

“This is one of those pinnacles,” Kirkpatrick told Variety before the ceremony. “Like the first time we did The Tonight Show or Saturday Night Live. This is a star on the Walk of Fame. It’s iconic. It’s one of those things you can’t even fathom. When we were told, I was in awe.”

Bass added, “I could not be more appreciative of what the world has given me and the guys. That’s why I’m excited for this ceremony, because it’s kind of cementing us in history. But this is really for the fans and every person we’ve ever worked with — every choreographer, every record [company] person, our families, our friends. It took thousands of people to get us to where we got. And I feel like that star ceremony is honoring every single one of them.”

As for reuniting with the other members of *NSYNC, he said, “It’s very rare that all five of us get to be in the same room together, but when we do, it’s like time never passed. We just pick up exactly where we left off.”

Would you love to see *NSYNC reunite more often (perhaps even for a tour)? Let us know @BritandCo!