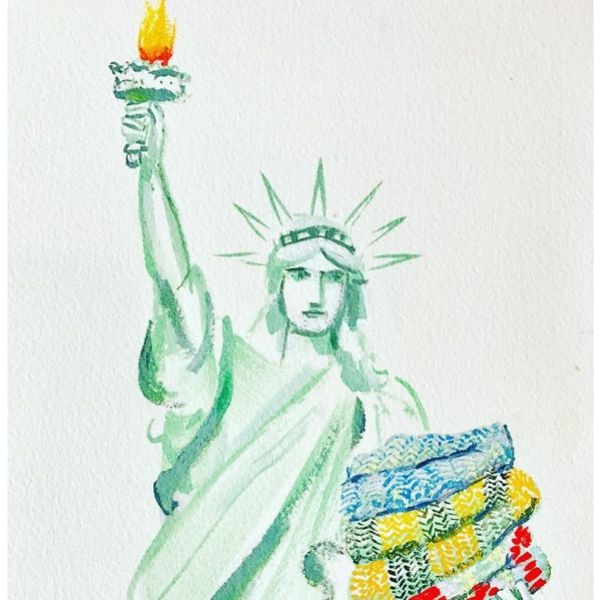 Since January’s Women’s March, it seems like more and more of us are taking up different forms of activism. The enduring symbol of the march was the Pussy Hat, a beginner-friendly knitting project that helped connect women around the country and the world. When the hat made the cover of Time Magazine as a symbol of women’s rights activism, it became part of the political landscape for 2017. Now, one of the co-founders of the movement is starting a new knitting project, using “craftivism” to help welcome refugees into the country.

Welcome Blanket is about to begin! We are taking the proposed length of the border wall (2000 miles) to make individual blankets for new immigrants to the United States. What is supposed to be a length of exclusion will now be for inclusion. With each blanket we are asking the blanket-maker for a note of welcome (template on our website). If you knit, crochet, sew or craft in some other awesome way, consider making a gift to welcome a new neighbor! #welcomeblanket

Jayna Zweiman cofounded the Pussy Hat initiative with LA writer Krista Suh as a way to create a visual statement for the Women’s March. Being an avid knitter, the idea that she could use her talent to help not just women but refugees formed the basis of her new work, the Welcome Blanket.

As the organization’s website states, a welcome blanket is often given to a new baby upon its arrival, so using that as the basis, Zweiman wanted to create a welcoming blanket for refugee families. Their goal is to create 3,200 blankets. Why that precise amount? Zweiman has calculated that the average throw blanket is 40×40 inches, which works out to 1,200 yards of yarn. The proposed length of the US-Mexico border wall is 2,000 miles, which means that they need 3,200 blankets to “cover” the same distance as the proposed wall would.

When the blankets are finished, Zweiman is asking that the knitters send them, along with a note outlining their own family’s immigration story, to be put on display at The Smart Museum in Chicago from July to September, when the blankets (along with their notes) will be gifted to refugee families across the country.

Will you make a welcome blanket? Tell us @BritandCo!

Kat Armstrong
Kat has been a writer, social media maven and mom for longer than she's willing to admit. She's also spent time in front of and behind the camera, interviewing celebs, politicians and acting as a producer for fashion and artistic photography shoots. When she isn't writing for various orgs and publications, she's hanging with her kids, husband and French Bulldog, Peter, in Toronto, Canada.
Feminism
Current Events
Feminism Politics
More From Current Events