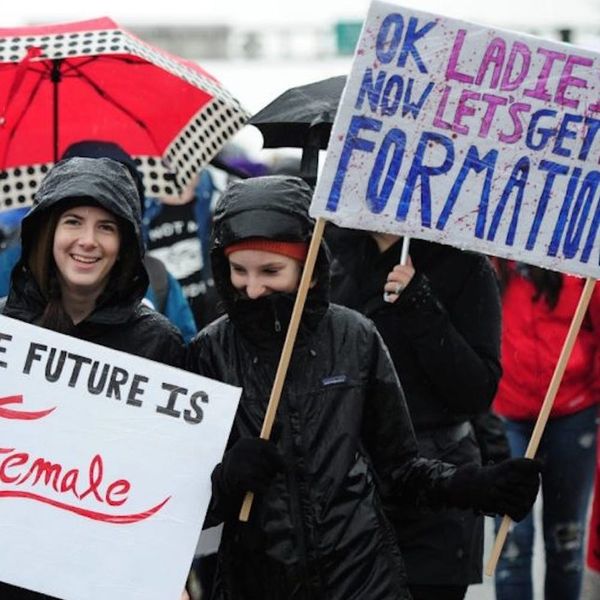 The powerful, history-making Women’s March may have taken place several months ago, but the conversation it sparked is still ongoing, as the event’s organizers continue to inspire us with their 10 Actions / 100 Days campaign (as do women in general!).

With the US falling behind in global gender equality rankings and the possible negative impact President Trump’s proposed healthcare plan could have on women’s health, the strides we’re making together as a gender with the feminist movement is an extremely important dialog to keep going — even when they’re seen in the most unexpected of ways. Case in point? The major spike in office supply sales being reported following the Women’s March. Their numbers go to show just how much buying power women actually hold and what a big economic role they play.

According to sales data gathered by The NPD Group, in the week leading up to the Women’s March, sales of poster boards increased by 33 percent, foam boards spiked by 42 percent and over 6.5 million poster boards were sold during January. Sales of all other necessary accessories to make those #nasty signs also saw a rise, including paint markers (+35 percent), specialty markers (+24 percent), permanent markers (+12 percent), glue (+27 percent), adhesives (+12 percent), scissors (+6 percent), and paper punches (+4 percent). Yowza! That’s a whole lotta office supplies.

As Fortune summed up, these stats showcase “a surprising side of women’s collective purchasing power at a time when many consumers are letting their wallets do the talking.” (You might recall the #GrabYourWallet campaign that many believe directly led to Ivanka Trump’s clothing line being dropped by several stores.)

It’s a point that echoes earlier research, which found that, of the $11.2 trillion spent by households in 2013, a whopping 73 percent was controlled by women. Talk about buying power!

What do you make of these findings? Tweet us @BritandCo.

Barbara Pavone
Barbara Pavone is a pop culture-obsessed writer based in beautiful (but ridiculously cold) Montreal, Canada. When she's not working, she's sipping on a Pimm's Cup and daydreaming about her celebrity hero, Saint West.
money
Adulting
money Politics
More From Adulting