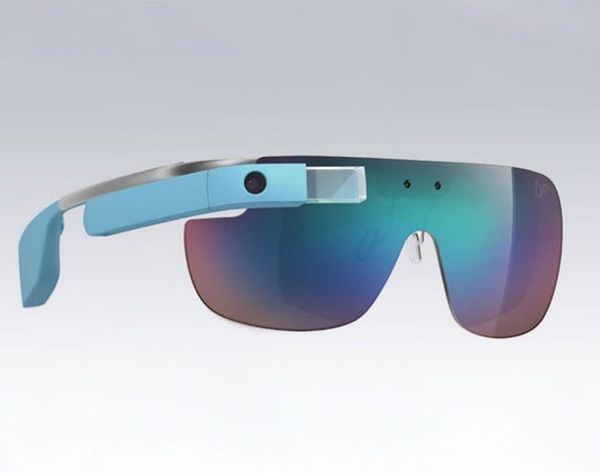 Whether you like it or not, Google Glass just became super fashionable. It was announced today the wearable received its latest geek chic makeover from designer Diane von Furstenberg in a collection of five brand-new frames and eight shades. All will be available to snatch up right alongside your Louboutins on luxury e-tailer Net-a-Porter, as well as the Glass website, starting June 23. Called DVF | Made for Glass, the collaboration is Google’s best move with Glass yet, but that has nothing to do with the design.

Yeah, too bad but true: Even after DVF put her sophisticated spin on the smart frames, including one pair of statement sunnies with large iridescent mirrored lenses + baby blue temple tips and another work-ready pair of glasses with rich mahogany-colored frames, Google Glass still looks like… Google Glass. Still clunky + nerdy at first glance, and for us, that means it’s still bookmarked in our Not-Yet Wearable folder.

Don’t call us haters, we’re just disappointed that a designer collaboration of this magnitude couldn’t spark a colossal revamping of the overall awkward design (yep, little Lego brick camera, we’re looking right at you). After all, Furstenberg holds the posh title of President of the CDFA and is the inventor of the iconic wrap dress — one of the most versatile, flattering and easy-to-wear silhouettes to come out of fashion in the last 40 years. And that’s exactly the kind of vibe we want from Google Glass. And alltech-cessories for that matter: To actually be wearable, and that means outside of the gym/the year 2050. Glass, we know there’s a She’s All That-style makeover in the cards for you yet. If you’re already on board with the heads up display, set an iCal alert for later this month and save up: A pair of DVF branded frames will cost $1,620, or approximately five wrap dresses.

What do you think: Are these DVF Google Glass frames chic or still super geeky? Tell us if you’d wear ’em in the comments below.