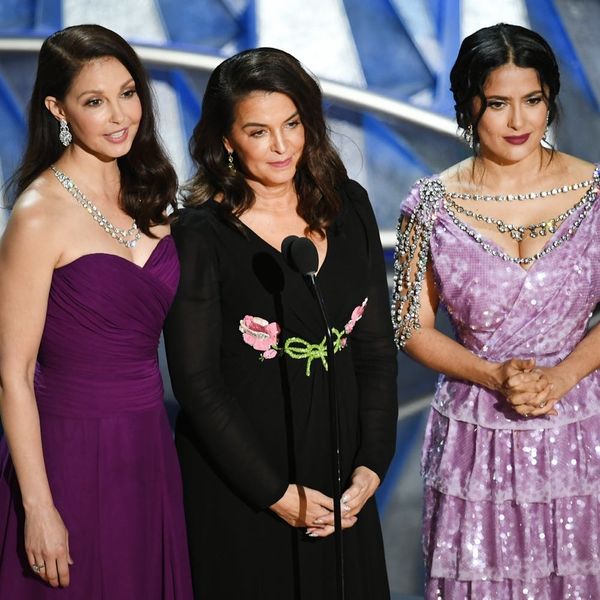 One of the 2018 Oscars’ best red carpet moments was undoubtedly Ashley Judd and Mira Sorvino’s show of support for the Time’s Up movement. The actresses spoke up for equality for women everywhere, a message that Judd, Salma Hayek, and Anabella Sciorra reiterated later when the 90th Academy Awards carved out a meaningful moment for some of Hollywood’s most pressing issues.

The three women — who, along with Sorvino, have come forward with sexual harassment accusations against Weinstein — took the stage to honor the Time’s Up and #MeToo movements while also highlighting the trailblazers of diversity in film over the the past year.

“Many spoke their truth and the journey ahead is long, but slowly a new path has emerged,” said Judd, speaking for the “mighty chorus” of women and men who have publicly named their accusers and joined the Time’s Up movement. “We work together to make sure that the next 90 years empower these limitless possibilities of equality, diversity, inclusion, intersectionality. That’s what this year has promised us.”

Hayek then introduced a montage of the 2018 Oscars’ groundbreaking, record-setting filmmakers, from Greta Gerwig and Ava Duvernay, to Jordan Peele and Kumail Nanjiani. “We salute those unstoppable spirits who kicked ass and broke through the biased perceptions against their gender, their race, and ethnicity to tell their stories,” she said.

While the montage was indeed poignant, it echoed host Jimmy Kimmel’s biting opening monologue in that even its serious subjects were treated to some light-hearted punchlines. Kumail Nanjiani, who, along with his wife, Emily V. Gordon, was nominated for Best Original Screenplay for their film The Big Sick, was a highlight. “Some of my favorite movies are movies by straight white dudes, about straight white dudes,” he said. “And now straight white dudes can watch movies starring me, and you relate to that. It’s not that hard. I’ve done it my whole life.”

Barry Jenkins, who directed last year’s Best Picture Moonlight, recalled the moving moment he realized the true importance of mainstream representation. “I remember going to see Wonder Woman, sitting in the theater, and hearing women cry, [and] it clicked,” he said. “This is what white men hear all the time. And all these women are having this experience for the first time. It’s going to be the same thing when people see Black Panther.”

Sorvino summed up the hope that the segment, and the current reckoning in Hollywood, has imparted: “It’s this possibility of the status quo not having to be the status quo any longer.”

What did you think of the 2018 Oscars diversity segment? Let us know @BritandCo.