Our Cup Of Tea: 9 Ways To Use Vintage Teacups 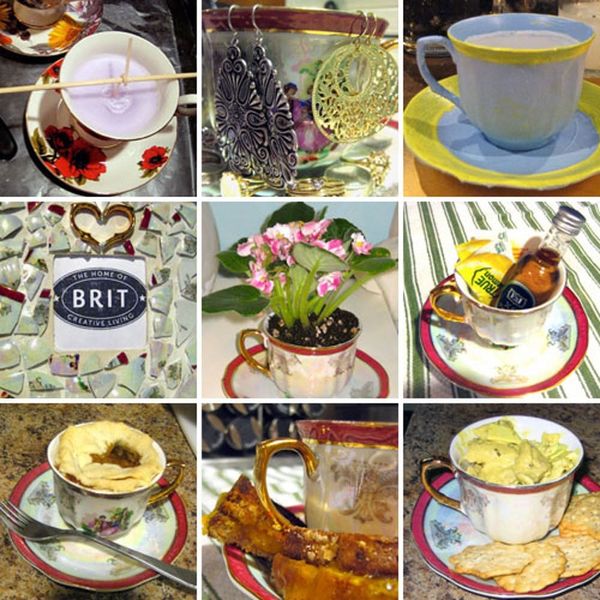 When I received a vintage teacup set as a gift a few years ago I thought, “These are beautiful, but what do I do with them?” For folks with one-bedroom apartments and tiny kitchens, it’s hard to find space to display fancy dishes, and its not super often that you invite friends over for tea.

And it turns out, finding vintage teacup sets is easier than I thought! While you can certainly find them on sites like Ebay, they’re also readily available at thrift stores for just a few dollars. The Salvation Army is a great place to start, and their site makes it easy to find locations near you. I found sets of vintage teacups for under $10, and individual cups and saucers for as little as $1 at the Salvation Army.

As for what to do with those awesome vintage teacups? Drumroll please… ;)

If you haven’t dabbled in candle-making before, this is a great first project.

– Double-boiler: if youʼll be doing this craft a lot, itʼs a good idea to get an inexpensive one just for candle-making because itʼs very difficult to fully get the wax out. You can also use a metal bowl over a regular pot.

First, pour water in bottom half of double boiler. Place top half on top. Clip thermometer to side. Melt wax: it should take about ten minutes. While wax is melting, prepare the teacups. Hot glue the cup to the saucer. Take a small bit of Tacky Wax and place it to the center of the bottom of each cup. Press the metal part of the wick onto the Tacky Wax. Place a skewer across the top of the cup. Gently wrap wick around the skewer and cut off the extra.

When wax reaches 180 degrees, turn the heat down. Add coloring when it reaches 175 degrees and fragrance when it reaches 170 degrees. Carefully pour the hot wax into the cups, leaving 1/2 inch at the top. Save the extra wax! Youʼll need it later. 30 minutes later, poke the center of the candle with a skewer to allow air bubbles to escape. There will be a little well near the center: donʼt worry, we fix it in a few minutes. 30 minutes after you fix the air bubbles, heat up the extra wax. Pour a little bit to fill in the well in the center of the candle. Once this has hardened, trim the wick to 1/4 inch.

Most people have jewelry boxes or cute ways to hang earrings, but the truth is that those jewels of yours that get the most use inevitably end up on your nightstand, on your sink, or on the kitchen table. Add a teacup to the mix and keep things contained, but still easy to access.

This is an easy to way customize one, two, or a whole dozen teacups. You can buy chipped teacups, mismatched ones of different sizes, and create a cohesive set.

For the paint, we used Martha Stewart multipurpose paint which is food and hand-washing safe. In order for it to stay on, you need to cure the paint in the oven. Place the cups and saucers on a baking sheet and preheat the oven to 350. You want the oven to be cool when they’re placed inside to avoid cracking. Heat for 30 minutes, and turn the oven off. Allow the cups to cool in the oven and take out when fully cooled.

This is a really cute way to recycle chipped or broken teacups. It doesnʼt have to be limited to a frame, it can be used for almost any flat surface: table, jewelry box, desk, bookshelf.

– tile adhesive and spreader (easy to find at any hardware store)

Wrap a teacup in the dish towel. Summon your inner frustration and smack it a few times with a hammer.

Open up the towel gently: You want the pieces not to be too small, but not to be too big that theyʼre still curved. Begin placing teacup pieces on the frame to plan how you want them to look. Continue smashing the teacup, wrapped in the towel so tiny porcelain shards donʼt hurt you, until you have enough pieces to cover the frame. I used the two handles to make a heart on the top of my frame!

Remove the pieces from the frame. Cover completely in a layer of tile adhesive. Begin putting the teacup pieces back on the frame. Press with medium-firm pressure for a few seconds as you put each one on, to insure that it bonds with the adhesive. Allow to dry for one hour.

This is an awesome idea for a housewarming gift or centerpieces for a party. It also looks cute if you just want to make it for yourself – add a little green to your nightstand! We love the idea of using teacup planters as an herb garden in the kitchen.

This is so easy! Just transfer the plant from its original planter to the teacup and fill in with extra soil.

A hot toddy is the perfect drink for winter. Made with honey, lemon, tea, and bourbon, it warms you all the way to your toes and makes the cold weather a little more bearable. This hot toddy gift set is perfect to give for a hostess gift, a get-well gift, or for an anytime-gift! And for Valentine’s Day, give to your Valentine and tell him or her that they’re “one hot toddy!”

– optional: card + Sharpie to write out the recipe

Arrange the lemon packets, honey packets, teabags, and mini-bottle of liquor in the teacup. Write out a Hot Toddy recipe on the cardstock with the Sharpie. Put the recipe in the cup. Place in a square box and wrap using one of HelloBritʼs awesome wrapping ideas!

And now, the food portion of today’s teacup bonanza.

These are quick and simple to make if you used pre-made pie crust, and the filling options are endless! We made a quick apple pie filling, utilizing turbinado sugar instead of white sugar in an effort to avoid processed foods.

Preheat oven to 350 degrees. Using a large round biscuit or cookie cutter, cut out eight circles. If you run out of space on the dough, roll it into a ball and re-roll with a rolling pin.

Take one of the circles and gently fit it into a teacup. Roll the edges over to make the crust. Repeat with the other teacups. Core and finely chop the apples. Toss with spices and sugar. Fill the teacups evenly with the mixture.

Place the remaining dough circles on the top of the mini-pies. Cut off excess with a knife and press the edges together with the bottom crust. Using a small knife, slit the top of the dough a few times to allow steam to escape.

Place the cups on a baking sheet and bake in the preheated oven for 45 minutes or until the crust is golden. Perfect for an updated tea party!

You’ve had a cup of soup before, but a teacup of soup is way cuter, and the saucer is perfect for a little grilled cheese action. We recommend using whole wheat bread and Earth Balance instead of butter to make this comfort food a bit healthier.

In a large pot, melt the Earth Balance on medium heat. Chop onion and basil and mince garlic. Add to pot and cook until soft. Add broth and tomatoes and simmer. Add salt and pepper to taste. And now it’s time for the grilled cheese. We used whole wheat bread, pesto, asiago and cheddar cheese. Yum.

Sophisticated and tasty, this is a perfect lunch item for a ladies brunch. In fact, we can imagine a whole teacup theme next time you throw a bridal shower, baby shower, or just feel like a midday get together with the girls.

– Crackers of your choosing

In a large skillet, melt the Earth Balance and olive oil together. Add the chicken breasts and rosemary and cook until golden. While the chicken is cooking, finely chop the apple and celery. Thoroughly mix the remaining ingredients together in a medium-sized bowl. Add the celery and apple and mix again. On a cutting board, use two forks to roughly shred the cooked chicken. Mix well with the chicken salad mixture.

Spoon into the teacups. Arrange crackers on the saucer and serve with a small cheese knife for spreading. Bon appetit!

How would you repurpose vintage teacups for non-tea drinking activities? We’d love to try out your ideas. Leave us a note in the comments below or say hello on Twitter.

Bonnie Irene is a law student who, when not studying or worrying about studying, preserves her sanity by cooking delicious food and making awesome crafts. You can find her blogging about cooking, baking, and crafting at her blog Majestic Domestic follow her on Pinterest.

16 DIY Easter Centerpieces That Will Make the Easter Bunny Jealous