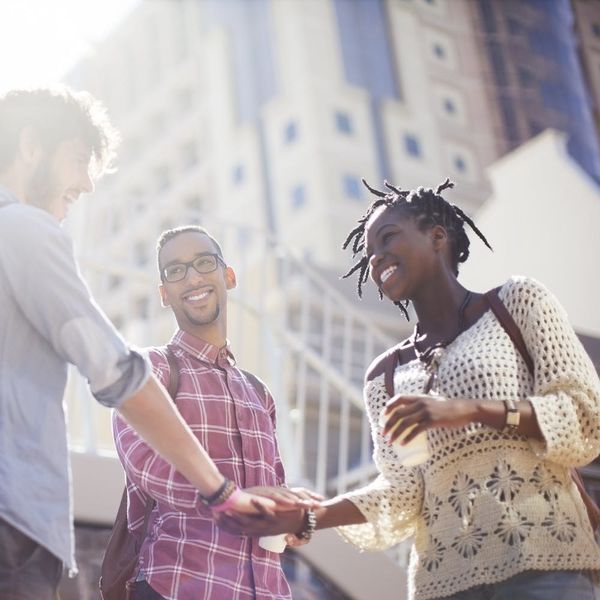 When you’re an introvert, you view life a little differently. Going to a post-work happy hour or even a dinner party at a friend’s house can be the cause of serious dread. You value your alone time and often need to recharge after too many social commitments stack up on your calendar. Sure, you’d rather curl up with your Netflix queue than head to that huge birthday bash for your coworker, but sometimes, you have to socialize. We chatted with author Vanessa Van Edwards, who runs a human behavior lab called The Science of People, about how we can all learn how to better navigate social situations. She calls herself a recovering awkward person and confesses that her first instant message buddy back in the days of AOL was the school nurse. Her book Captivate: The Science of Succeeding With People, delves even deeper into this topic of how to use science to understand human behavior. Van Edwards shares some simple tips for standing out in a crowd (in a good way).

1. Get into the zone. In her book, Van Edwards has an illustration of a typical party setup with drinks, food, and the entrance. She breaks up a room into three zones: the Start Zone, the Social Zone, and the Side Zone. You find the most nervous people in the Start Zone — they’re running late, trying to find people they know, or worrying about first impressions. The Social Zone, where the refreshments are found, is often where people feel the most comfortable after they’ve grabbed an app or a cocktail. “Plant yourself at the end of the food line or near the bar. Once someone has a snack or a drink in hand, they are much more likely to want to strike up a conversation,” says Van Edwards.

2. Don’t fake it. The expression, “Fake it until you make it,” doesn’t hold up in social situations. In the Science of People’s virtual Body Language Quiz, viewers are shown a genuine smile hidden among three fake smiles and 87 percent of quiz-takers picked it out. “If you go to events that make you unhappy, it will be incredibly difficult to increase your memorability,” says Van Edwards. She suggests instead interacting in situations where you don’t have to fake enjoyment.

3. Start a great convo. We’ve all been there. Someone starts a conversation with, “What do you do?” and then responds to your answer with, “That’s nice,” and the exchange is over pretty fast. Instead of diving into regular conversation starters, Van Edwards recommends conversation topics that engage and stimulate in-depth discussions. Questions like, “What was the highlight of your day?” and “What personal passion project are you working on?” are more likely to ignite memorable convos.

4. Act like an Olympic winner. Your body language says a lot about you before you even say a word. Van Edwards talks about how researchers Jessica Tracy and David Matsumoto studied how humans respond to success and failure by looking at how Olympic athletes behave post-event. “The fact that athletes instinctively use the same body language shows us how innately programmed we are to broadcast victory and defeat nonverbally,” says Van Edwards. To display successful body language, start with a firm handshake. Next, take on a winner’s posture. Van Edwards recommends keeping your shoulders down and back, making sure your hands are visible, and aiming your chin, chest, and forehead straight in front of you.

5. Create deeper connections. When you find out that you have a similar interest, background, or commonality with another person you’ve just met, bookmark that moment for future reference. For example, Van Edwards met a woman at a party who also was the eldest of three sisters with a 12 year age span between the sisters. She told the woman that she wanted to connect with her on Facebook so “the next time one of my sisters asks me to get her out of trouble, you might be the only person in the world who gets it.” They became Facebook friends and have since bonded over their mutual family situations.

6. Speak in a natural tone. Talking on the phone can make anyone nervous, and when you’re nervous, your voice might hit a higher pitch. Van Edwards says that a higher-pitch voice often signals that you’re not mature, since higher voices are often associated with children. “Stay in your lowest natural range. You can do this by taking a deep breath in, and then slowly letting it out as you relax your shoulders, neck, and head. Do it again. It’s impossible to speak in a higher range when your vocal cords are relaxed,” says Van Edwards.

7. Find the “light up” topics. Telling stories from your life are wonderful ways to naturally elicit positive emotions with another person. When searching for something to chat about, see what subjects make them light up and ask more about that topic. “This makes the entire conversation more interesting, you are more engaging, and they are more excited about the conversation. Win, win, win,” says Van Edwards.

How do you navigate social situations as an introvert? Share your tips with us @BritandCo.