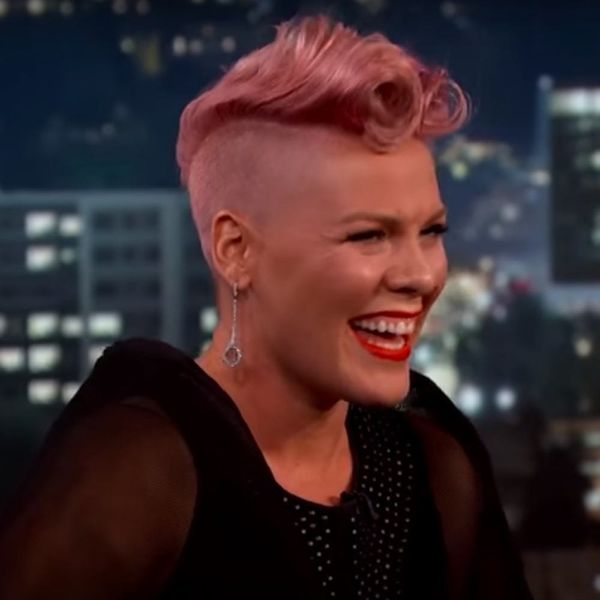 Getting a little flustered around the object of our affection (lookin’ at you, office crush) is pretty darn relatable, and that’s on a non-celeb level. Becoming totally tongue-tied when meeting an A-List crush may not be something that we’ve all been lucky enough to experience, but we surely can imagine what it would be like: Turn crimson, avoid eye contact then flee with embarrassment. Pink no longer has to imagine how she’d react, as the star was completely bowled over when she was surprised by her own celebrity crush, Johnny Depp.

While visiting Jimmy Kimmel Live to promote her new song “Just Like Fire” from the movie Alice Through the Looking Glass, which stars Depp as the Mad Hatter, the 36-year-old singer admitted that she’d dodged her fellow late-night guest backstage. Why would she possibly do that?

Well, it turns out that the famous actor is one of just two fellas who make Pink swoon to the point of near-speechlessness. Telling Jimmy that her hubby, Carey Hart, actually encouraged her to say hello to Depp during a former meetup (as she hid behind records), she admits that it wasn’t exactly the smoothest intro.

“I can’t do it,” she says with a giant smile. “Him and Michael Keaton. I can’t… I can’t…Beetlejuice gets me every time.” Giggling madly, Pink even reveals that she avoided Micheal Keaton in a restaurant once by actually hiding under her table (OMG, girl… just hilarious). We totally feel you.

Then, BAM! Just as we’re still laughing over the tale of her epically awkward meeting, out walks Johnny Depp and Pink goes nutso. Blushing hard (turning the color of her own hair, according to the host), she gets a hug from Jack Sparrow himself (and Jimmy even gets a kiss and flushes a bit himself) as the crowd squees with delight. “This is awful,” the embarrassed singer says through giggles. Pink just became the most relatable celeb in the world.

Check out her sweet swooning moment in the vid below.

Have you ever met a celebrity crush? Tweet us @BritandCo!