This Is Why Your Office Crush Is Inevitable, but Still Risky 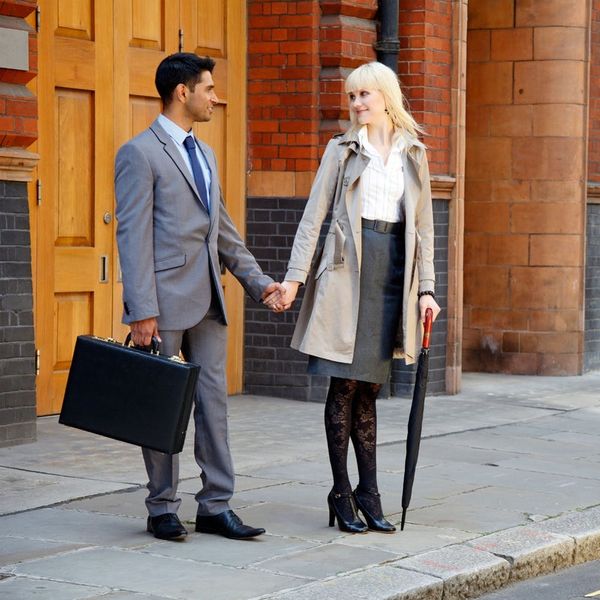 As more and more millennials enter the workforce, more Gen-Y trends are making their way into the office. Workers are bringing their dogs to work, choosing co-working over cubicles and, increasingly, finding love in meetings, rather than at bars. According to a recent Harris poll, over 40 percent of the people surveyed said they had experienced a workplace romance. Despite the rising numbers of office lovers, relationship expert and author Ty Tashiro says that while mixing work and play might do wonders for your work/life balance temporarily, it could be risky for your career and happiness in the long run.

“There are some pretty big drawbacks to love in the workplace,” Ty said, “the biggest of which is the social pressure you might face: If your romantic partner has a lot of power, people might think that you’re with them just to get a promotion.” Finding a crush at work is practically inevitable, Ty told us. It makes sense: Depending on where you work, you’re probably working with people of a similar age, with similar interests and life ambitions as your own. You and your coworkers are also more likely to have related backgrounds and levels of education.

One factor in particular makes workplace romance unavoidable: According to Ty, the number one best predictor of attraction is physical proximity. This idea is driven by the exposure effect, which says that the more you see something, the more you like it. And considering the fact that Americans spend over 40 hours per week working, the chances you’ll like what you see at the office are stronger than ever.

Another reason millennials are drawn to those office crushes? They’re more likely to job-hop than their baby boomer counterparts, who are accustomed to working for one company until retirement. This discrepancy means that millennials can afford to be more lenient about blurring the lines between coworker and romantic partner. If you know you’ll relocate soon, you’ll be more likely to jump at the chance to meet your S.O. at the office.

Although the chances of finding romance at work are high, Ty cautions against giving in to the temptation of creating a relationship out of a coworkership. “If there’s ever a time to consider the worst-case scenario, it’s when thinking about starting a relationship at work,” Ty said. “It’s really worth it to think about what would happen if the relationship doesn’t work out.”

If this worst-case scenario does occur, Ty said, losing your job and your work buddies could be part of the consequences. Plus, since so much of your life is invested in work while in an office relationship, losing that person could also mean losing part of your identity. Despite all the gloomy possibilities, there’s an obvious silver lining to risking it: If the relationship does work out, Ty said, then the relationship is quite likely to be successful, due to a ton of common ground between you. Talk about a power couple!

Love in the workplace: Love it or hate it? Tweet us @BritandCo and let us know!

Gabrielle Gresge
Gabrielle Gresge is a Chicago native and journalism student at the University of Missouri. While not chasing deadlines, she enjoys giving campus tours, exploring her new home, and missing her old one. She loves to write about these experiences in her own handwriting at gabriellegresge.wordpress.com.
love
Relationships
love Office work
More From Relationships