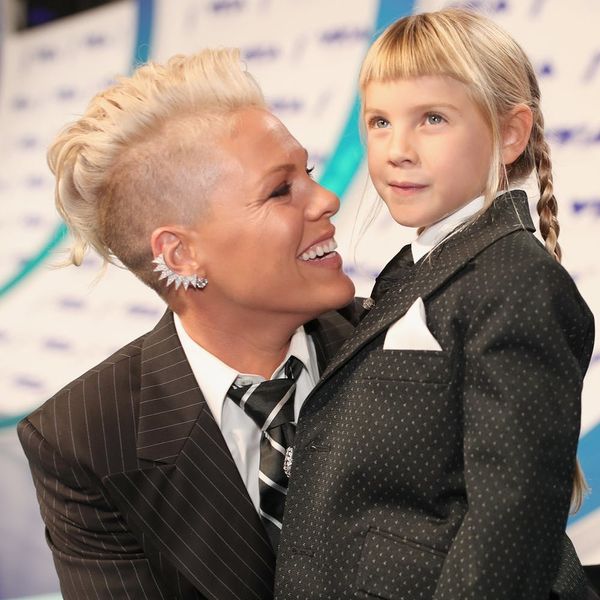 When Pink made her epic MTV VMAs Video Vanguard Award acceptance speech this summer, she not only had us in tears, but she also proved that she’s one amazingly progressive mom. She further proved that when she revealed in a recent interview that she’s raising her children in a gender-neutral environment.

Chatting with The Sunday People, the 38-year-old mom of six-year-old Willow and 11-month-old Jameson opened up about her “very label-less household” and the open-minded environment she and her husband, Carey Hart, try to foster for their kids.

“I was in a school and the bathroom outside the kindergarten said, ‘Gender Neutral – anybody,’ and it was a drawing of many different shapes,” the “What About Us” singer revealed, adding that this is the sort of change she wants to see around her little ones. “I took a picture of it and I wrote, ‘Progress.’ I thought that was awesome. I love that kids are having this conversation.”

It’s certainly something that the star (who has never conformed to stiff gender roles) can relate to. Despite the fact that she does “bake sales and lemonade stands” and takes her kid to school because she’s “a f*cking grown up now,” she says, “It’s so weird. I’m still a 12-year-old boy.”

But while Pink may feel like a preteen, young Willow is apparently dreaming of her future adult life. “Last week, Willow told me she is going to marry an African woman,” Pink told The Sunday People. “I was like, ‘Great, can you teach me how to make African food?’ And she’s like, ‘Sure, Mama. And we are going to live with you while our house is getting ready.’ I was like, ‘What the f*ck, who are you? Who is paying for this, by the way?'”

We certainly know who Willow is. Along with becoming a familiar face on the red carpet at top industry events (always showing up in on-point outfits that any adult would love to slay), she’s one lucky little girl who has parents who are willing to nurture her as she really is.

How open-minded do you feel you are when it comes to your kids? Let us know @BritandCo!