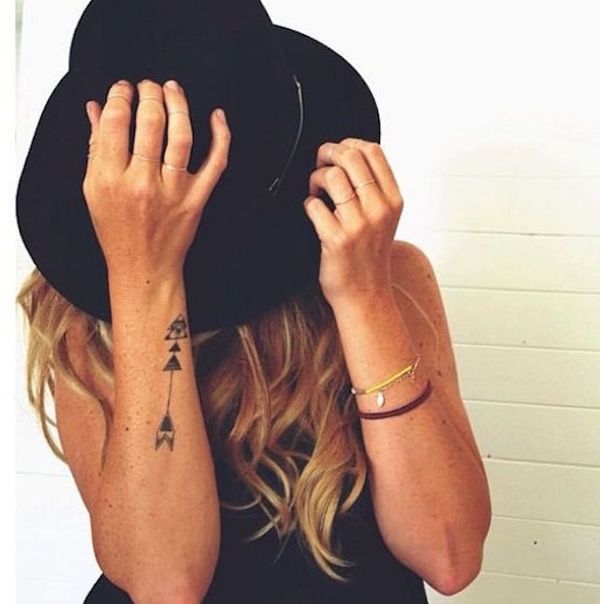 It always seems like folks who have tattoos have infinite coolness. While getting permanently inked isn’t for everyone, it’s safe to say that it’s one of the most interesting forms of self-expression. And, whether or not you like to admit it, you have probably spent endless hours scrolling through your Pinterest feed scouring for placement ideas and designs, or simply living vicariously through those undeniably cool inked-up people.

1. Delicate Script: While her wrist tattoos are inspiring us, it’s her surprising bicep tattoo that has us reeling with delight. We’re used to seeing big bold tats in spaces like this (“I Love Mom,” anyone?), but the simplicity of this delicate script is certainly refreshing. (Pinned via thewanderingb on Ink Pen)

2. Bold Leg Patterns: If pattern is what you crave, match your bold leg tattoo to an equally vibrant dress. Huge fans, huge. (Pinned via stylegourmand on inspiration-africa)

3. Symbols: We know what you’re thinking: Ouch! But, seriously, how cool is the placement of this mini tattoo? This gives us yet another reason to leave our shirts just a touch unbuttoned. (Pinned via Free People on BLDG25Blog )

4. Street Style Sleeves: It just doesn’t get any cooler than this street style maven. One look at her ultra-feminine style and you wouldn’t think this beauty has countless badass and bold tattoos all over her chest and arms. (Pinned via TJTaylor on StreetStyle )

5. Fragile Stems: If you’re in search of dainty tattoo inspiration, look no further than this crossed twig and branch design. (Pinned via mkaraclay on tattoo)

6. Classic Palm Tree: This palm tree tattoo should be on every Cali girl’s must-have list. Plus, it makes for the perfect Instagram moment alongside your iced coffee, no? (Pinned via itsmariaalyssa on tattoos)

7. Coming Up Roses: Nothing like gorgeous floral to add a touch of femininity to a neck tattoo. (Pinned via belovedperseus on Ink)

8. Badass Rose: If there’s one person who can convince us to cover our bodies in badass tats, it’s girl-of-the-moment Ruby Rose. (Pinned via laveniaslaughte on hairstyles; photo via Imeh Akpanudosen/Getty)

10. So It Goes: Have a favorite saying? Put it somewhere you’ll always remember it. (Pinned via jasmingperez on bodyart)

11. Feather Tattoo: Whoever said feather tattoos were out obviously hasn’t been hitting up the street style scene lately. (Pinned via sosmode on tattoo)

12. Garden Party: Who says large-scale tattoos have to be masculine? This root and flower one is seriously pretty, and who knows — your botanic-loving grandma might even approve. (Pinned via shelbytsa on Ink)

13. Roman Numerals: If a waaay badass tattoo is what you crave, look no further than editor Kate Wolfson’s seriously tough but totally chic wrist tattoo. And how amazing are those nails? #Winning (Pinned via jasmingperez on bodyart)

14. Cupcakes and Fashion: If you have a love for cupcakes, like moi, then this tattoo is right up your alley. (Pinned via dropdeadgorgeousdaily on shoeporn)

15. She’s a Warrior: What does a bohemian girl get when she decided to get stamped? An arrow, of course. Take a cue from this girl when you decide to take the plunge. (Pinned via yokethelabel on accessories)

16. Model-Off-Duty: If you haven’t looked to model, designer and all-around cool girl Erin Wasson’s tats for inspiration, you’re totally missing out. She’s known for her chic symbolic tattoos. (Pinned via FreePeople on Lookbooks)

Are you thinking of getting a tattoo anytime soon? Did any of these inspire your new ink? Tell us in the comments!

Jasmin Perez
Jasmin is a bi-coastal fashion and lifestyle writer with a penchant for event planning and DIYs. You can usually catch her scouring the web for the latest trends or hunting the streets for her next favorite coffee shop. She has bylines at Lucky, OliviaPalermo.com, Teen Vogue, and Who What Wear.
Beauty Trends
Tattoos
Beauty Trends Tattoos
More From Tattoos