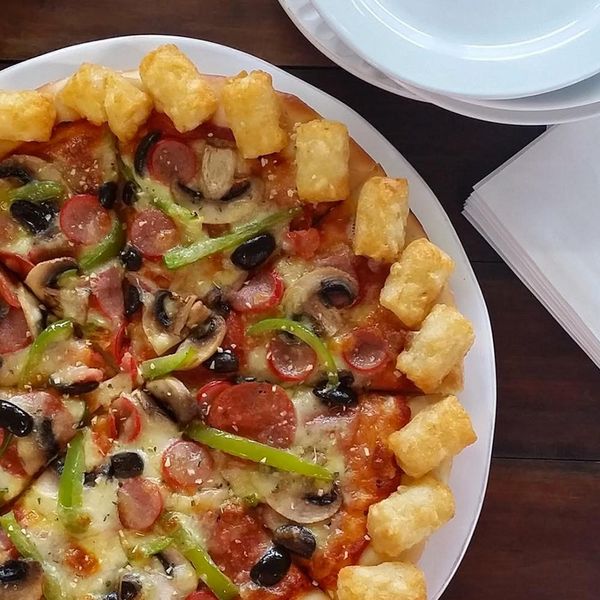 Labeled the “Hash Bites Crust” (hash bites are what New Zealanders call hash browns), the new addition to the classic junk food was a novelty item made available at Pizza Hut locations in New Zealand for a limited time. Sadly the tater tots’ five minutes of fame seem to have come to a close and this insane creation is no longer available.

The idea of adding potato to your pizza may seem crazy at first, but this actually isn’t the fist time potato has been used as a topping on pizza. In fact, popular SF pizza chain Escape From New York offers a pesto and garlic pizza topped with roasted potatoes that’s a favorite among locals (this writer included). And also, totchos (tater tots + nachos) are a thing now, right?

If you’re super bummed that you can’t order this pie from Pizza Hut, we have some (sort of) good news. There’s another wacky new Pizza Hut creation you can get here in the states: garlic knot pizza. The idea is pretty much exactly what it sounds like: a customizable pizza that’s crust has been replaced by 16 cheese-stuffed garlic knots. If you’re feeling pretty lazy about what to serve during your upcoming Super Bowl party, this might just be the perfectly weird snack food your guests will love.

(Photo via @pizzahutnz and @pizzahut)