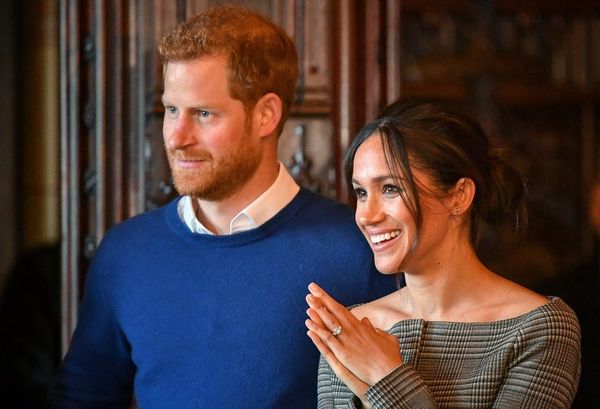 This year marked Prince Harry and Duchess Meghan Markle’s first Valentine’s Day as a married couple, but since Harry was tending to royal duties on February 14, they spent the special occasion in different countries. The Duke of Sussex still got a very special surprise to remind him of his wife, though.

While Markle, who is expecting the couple’s first child this spring, stayed behind in England, Prince Harry traveled to Bardufoss, Norway, to visit Exercise Clockwork. Based 200 miles inside the Arctic Circle, the military operation teaches personnel how to survive, operate, and fight in extreme cold weather.

The prince, who is also the Captain General of the Royal Marines, showed up in his uniform to mark the 50th anniversary of Commando Helicopter Force and Joint Helicopter Command deploying to Bardufoss.

Although he was there in an official capacity, his hosts added a few personal touches to make his visit extra-special. At one point, he was escorted to a small igloo called Quinzhee Shelter, which had been decorated with candles and pictures from his and Markle’s May 2018 royal wedding.

“You weirdos,” Harry joked, according to E! News. “It’s very kind of you to invite me into your private shrine or whatever you want to call it. And the music, is that part of it? Romantic, isn’t it.”

We don’t know how Markle spent the 14th, but according to People magazine, she once wrote about Valentine’s Day on her now-defunct blog The Tig. “Without fail, every February 14th, I wake up feeling like I’m immersed in a Robert Doisneau photo, waiting with bated breath to be dipped into a kiss,” she wrote. “This is all happening in black and white, of course. And in Paris, if I had my way. But delusions of francophile grandeur aside, Valentine’s Day is special wherever you happen to find yourself. And in terms of gifts, be it breakfast in bed, a sweet love note, or a single flower, it really is the thought that counts.”

How did you spend Valentine’s Day this year? Let us know @BritandCo!

Desiree O
Desirée O is a ‘Professional Bohemian’ who loves anything and everything related to the arts, entertainment, and pop culture. She ADORES being a ‘Newsy’ for Brit + Co, covering all of the latest tidbits of awesomeness that you want to read about. When she’s not writing, she’s either making messy art, going on long adventurous walks with her camera, or poking around over at bohemianizm (http://www.bohemianizm.com/). You can find out about Desirée O and her work at http://DesireeO.com/ or follow her on Twitter @DesireeO.
Celebrity Couples
Celebrity News
Celebrity Couples Royal Family Valentines Day
More From Celebrity News