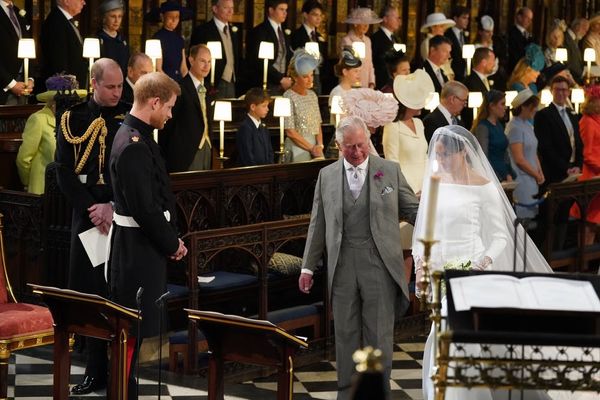 In May 2018, with just one day to go before Prince Harry and Meghan Markle’s royal wedding, the couple asked his father, Prince Charles, to walk the bride down the aisle in her father’s absence (he was unable to make the trip to the UK). Now, in an interview for BBC One’s new documentary, Prince, Son and Heir: Charles at 70, Harry is opening up about what the moment meant to the family.

“I asked him to and I think he knew it was coming, and he immediately said, ‘Yes, of course, I’ll do whatever Meghan needs and I’m here to support you,'” Harry revealed, according to E! News. “For him, that’s a fantastic opportunity to step up and be that support, and you know, he’s our father, so of course he’s going to be there for us.”

The request came at the last minute because up until two days before the star-studded ceremony, Markle’s father, Thomas Markle, planned to be there himself to walk her down the aisle at St. George’s Chapel. He had to cancel his trip for health reasons.

“Sadly, my father will not be attending our wedding,” the former Suits star wrote in a statement issued by Kensington Palace on May 17. “I have always cared for my father and hope he can be given the space he needs to focus on his health.”

The news came on the heels of a tumultuous time for Markle’s family. Initial reports claimed that Thomas would not attend the wedding due to a staged paparazzi photo controversy, but later reports stated that he was unable to travel because he needed to recover from heart surgery.

Markle notably walked herself halfway down the aisle before meeting Prince Charles at the Quire — something no royal bride in the UK had done before her. Her mother, Doria Ragland, was also by her side throughout parts of the ceremony and accompanied her daughter in the car to Windsor Castle on the morning of the wedding.

What do you think of Harry’s kind words about his father? Let us know @BritandCo.