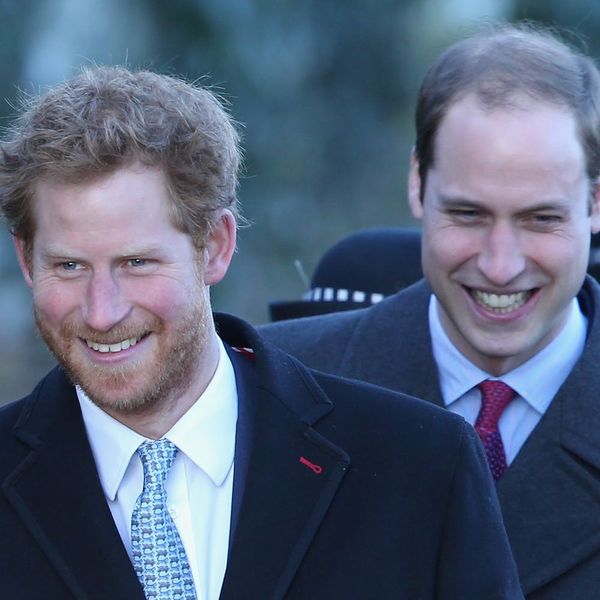 When Prince Harry announced his engagement to Meghan Markle back in November, we naturally assumed that we’d soon be seeing the groom’s big brother, Prince William, gearing up to be best man in the wedding party. Yet as the Duke of Cambridge has just revealed, he hasn’t yet been asked to step up to the task — and there might be good reason for that.

As the elder of Princess Diana’s sons told UK radio host Roman Kemp on Wednesday when the subject came up, “He hasn’t asked me [to be best man] yet, just to clear that up.” According to People, he also jokingly added, “It could be a sensitive subject.”

While it’s possible the Royal was referring to the the fact that his younger sibling has other candidates in mind or is simply taking his sweet time, there may also be some royal red tape getting in the way, just as it did for Kate and Pippa Middleton this past spring, when the younger of the Middleton sisters wed James Matthews.

As the future king, Prince William may not be allowed to serve in a subservient role to someone who could potentially be his future subject. Despite the fact that Prince Harry is also a royal, and acted as William’s best man (or “supporter” as they’re called in the UK) when he married Duchess Kate back in 2011, he’s technically a few notches below his sibling when it comes to the royal hierarchy, a fact which could potentially stand in the way of family sentiment.

Then again, considering that the soon-to-be groom has already broken several rules where tradition is concerned — his fiancée, Meghan Markle, became the only person to ever spend Christmas with the royal family out of wedlock, and also broke their no-black rule for the couple’s first official appearance of 2018 — there may still be a chance that Prince William will be standing by his brother’s side when the royal ceremony takes place.

The volunteers have been filming videos for the #BestManProject, which will help others spot mental health problems & recognise when a friend is in need:https://t.co/eJEOV8a5Qo

Regardless, the 35-year-old is still helping to show his brother support, aiding his younger bro in launching the “Best Man Project” (ironic, no?) in conjunction with the Campaign Against Living Miserably (CALM), which aims to promote the idea that men do not have to wait until a wedding happens to be a “best man” or supportive friend.

“Our relationship is closer than it’s been because of the situation we’ve been through,” he said, referencing the death of their late mother. “Losing our mother at a young age, it’s helped us travel through that difficult patch together. You’re like-minded. You go through similar things — it’s a bond, and it’s something you know you’ve tackled together and come out better for it.”

“That’s the thing about being a best mate,” he added, “inevitably one of you is sometimes on an up, while the other is on a down. You’re always there for each other and repaying that favor.”

Hopefully Prince William will be able to repay that favor once more by being Prince Harry’s best man when the royal wedding takes place on Saturday, May 19, in St. George’s Chapel at Windsor Castle.

Do you think Prince William will be Prince Harry’s best man/supporter? Let us know @BritandCo!

Desiree O
Desirée O is a ‘Professional Bohemian’ who loves anything and everything related to the arts, entertainment, and pop culture. She ADORES being a ‘Newsy’ for Brit + Co, covering all of the latest tidbits of awesomeness that you want to read about. When she’s not writing, she’s either making messy art, going on long adventurous walks with her camera, or poking around over at bohemianizm (http://www.bohemianizm.com/). You can find out about Desirée O and her work at http://DesireeO.com/ or follow her on Twitter @DesireeO.
Celebrities
Celebrity News
Celebrities Family Royal Family
More From Celebrity News