Princess Diana’s Niece Just Walked the Runway in a Tiara 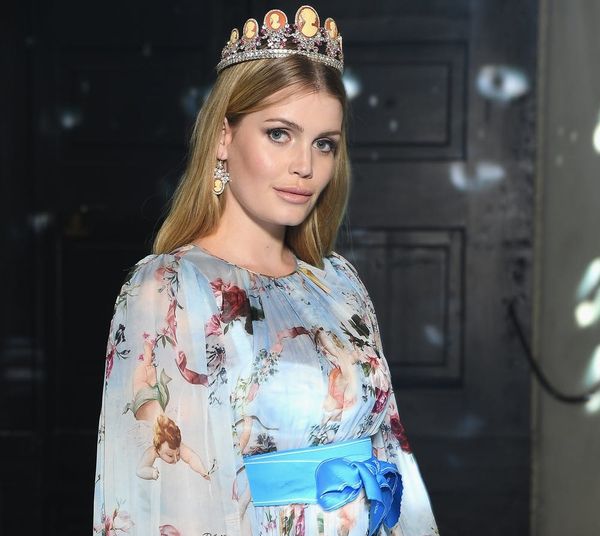 The Royals are taking over fashion month! Not only did Queen Elizabeth II steal the spotlight from models at Richard Quinn when she showed up in the front row of the designer’s runway show, where she would later present him with the first annual Queen Elizabeth II award for British design, a member of their own, Lady Kitty Spencer, just turned up ON the catwalk at Dolce & Gabbana.

For those that aren’t familiar, Spencer is the 27-year-old niece of the late Princess Diana by way of the late figure’s youngest brother, Earl Spencer. She also just so happens to be the star of the design house’s spring/summer 2018 campaign, making her the perfect candidate to display the company’s wares for its latest “Secrets & Diamonds” presentation.

She took to the runway in a sweeping powder blue cherub-print dress with a bold, contrasting waist ribbon and billowing sleeves. It was her accessories that really made the look pop, however, with cameo diamond earrings that reflected the Victoria age and a matching — get this! — tiara setting her apart from the pack.

The model has donned a crown for the company before: Just five months earlier, she was spotted sporting an elegant jewel-encrusted topper as she walked in its secret show.

For her second look, however, she ditched the headwear, letting her long blonde locks cascade down her back as she showed off a floor-length sparkly silver sequin number with a matching belted waist.

She wasn’t the only royal family member strutting her stuff, either. The Manners sisters (who have oft been compared to the English Kardashians) Violet, Alice, and Eliza, daughters to the Duke and Duchess of Rutland, also made their into the designer’s latest lineup.

What do you think of Lady Kitty’s runway look? Share over @BritandCo.

Nicole Briese
Nicole is the weekend editor for Brit + Co who loves bringing you all the latest buzz. When she's not busy typing away into the wee hours, you can usually find her canoodling with her fur babies, rooting around in a bookstore, or rocking out at a concert of some sort (Guns N' Roses forever!). Check out all her latest musings and past work at nicolebjean.com.
Celebrities
Style News
Celebrities Fashion Week Royal Family