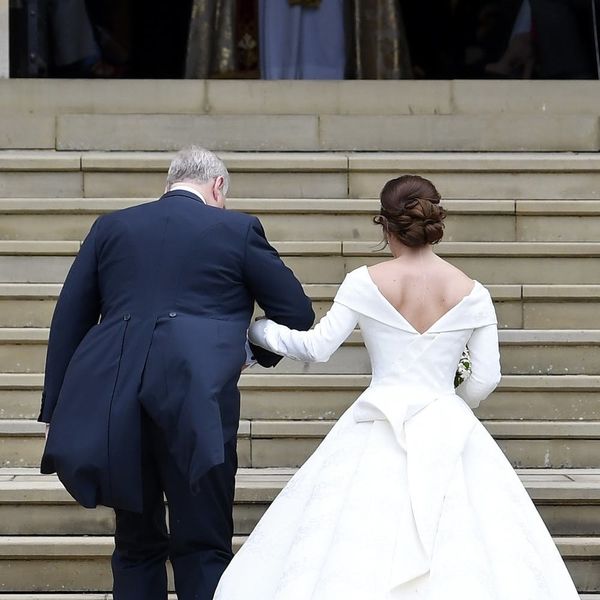 Royal wedding bells are ringing — again! Princess Eugenie and Jack Brooksbank tied the knot in Windsor, England this morning in a ceremony attended by roughly 500 guests — an intimate affair, by royal standards — at St. George’s Chapel (where Prince Harry and Meghan Markle tied the knot in May). (Photo via Toby Melville / POOL / AFP/Getty Imges)

Eugenie, who is the daughter of Prince Andrew and Sarah Ferguson (the original Fergie), wore a low-back gown by British label Peter Pilotto, designed to show her scar from spinal surgery to correct scoliosis at age 12. “I had an operation when I was 12 on my back, and you’ll see on Friday [at the wedding], but it’s a lovely way to honor the people who looked after me and a way of standing up for young people who also go through this,” she said ahead of her wedding on ITV’s This Morning. “I think you can change the way beauty is, and you can show people your scars and I think it’s really special to stand up for that.” (Photo via Samir Hussein/WireImage)

The dress also featured a neckline that folds around the shoulders and a full length train, as well as a number of meaningful symbols, including a thistle for Scotland (acknowledging the couple’s fondness for Balmoral), a Shamrock for Ireland (a nod to the Ferguson family), and the York Rose and ivy to represent the couple’s home. (Photo by Toby Melville – WPA Pool/Getty Images)

Eugenie accessorized with the Greville Emerald Kokoshnik Tiara, made in 1919, lent by her grandmother, the Queen, diamond and emerald drop earrings, which were a wedding gift from the groom, satin peep-toe heels by Charlotte Olympia, and of course, her rare pink sapphire engagement ring. Her wedding ring is made from a piece of Welsh gold given by the Queen (Jack, like Prince William, won’t wear a wedding ring.) (Photo via Toby Melville/AFP/Getty Images)

Eugenie and her new husband met eight years ago at a ski resort in Switzerland and got engaged in Nicaragua this past January. The Princess has already proven they are — and will continue to be — a modern royal couple: The wedding was rumored to be plastic-free, in line with Eugenie’s environmental stance. She told British Vogue, “My whole house is anti-plastic now – and Jack and I want our wedding to be like that as well.” And like Princess Diana, Kate Middleton, and Meghan Markle before her, Eugenie also chose to omit the word “obey” from her vows. (Photo by Ben Birchall/PA Images via Getty Images)

The party will continue on Saturday afternoon with a festival-style event that will include a fairground and food stalls. Harry and Meghan may skip this part to prep for their upcoming tour of Australia, Fiji, Tonga, and New Zealand early next week. They will see the happy couple soon enough though: Eugenie and her new husband will live in Kensington Palace, along with Meghan and Harry, now that they’re married. (Photo via Steve Parsons/AFP/Getty Images)

If you didn’t get up quite early enough to watch the nuptials live, never fear: TLC re-aired the wedding at 7:25 am EST and they will have it available to watch on-demand via the TLC Go streaming platform. (Photo via Toby Melville/AFP/Getty Images)