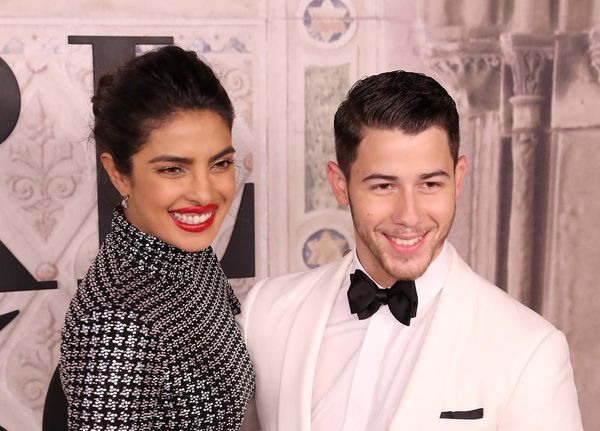 This weekend, Priyanka Chopra and Nick Jonas officially tied the knot. The famous duo exchanged vows on Saturday, December 1, in several stunning ceremonies in Rajasthan, India. And while we still can’t get over the bride’s breathtaking pre-wedding Mehendi and Sangeet ceremony looks, we are finally learning about Chopra’s custom wedding gown and her reception dress.

According to an exclusive story featured in People, Jonas and Chopra both wore wedding looks by Ralph Lauren that incorporated meaningful details that referenced the couple’s relationship. Jonas’ six-button, double-breasted Purple Label tux, for example, had a piece of lace from the bride’s gown sewn in and stitched with the Urdu words “My Jaan,” which translates to “My Life.”

As for Chopra, her long scallop-sleeved, sheer dress displayed embroidered floral and scroll motifs with lace-effect tulle appliqués. The high-neck collar overlay complemented her underlying strapless dress that boasted over two million mother of pearl sequins. The design was topped off with a jaw-dropping 75-foot long tulle veil.

But if those details aren’t enough to take your breath away, the intimate messages hidden throughout the dress surely will. Chopra included a slew of touching tributes to her new husband and family. She had a piece of her now mother-in-law’s wedding dress from her 1985 ceremony sewn into her gown alongside notes for her new husband. According to People, Chopra’s dress included the following touching tributes: “Nicholas Jerry Jonas” (her new husband’s full name), “1st December 2018” (their wedding date), “Madhu & Ashok” (the names of Chopra’s mother and father, Ashok Chopra, who died of cancer in 2013), “Om Namah Shivay” (a Hindi mantra invoking Lord Shiva), “Family,” “Hope,” “Compassion,” and, of course, “Love.”

It turns out that Chopra wasn’t quite finished astonishing us all with her wedding looks. At a December 4 wedding reception, she and Jonas partied in New Delhi’s Taj Palace wearing celebratory attire.

Jonas channeled romantic vibes in a blue velvet suit while Chopra dazzled in a champagne-hued Falguni Shane Peacock lehenga choli (which is a traditional Indian skirt and top) that included silver embellishments, according to Vogue India.

What do you think of this amazing celebrity wedding? Tweet us @BritandCo.