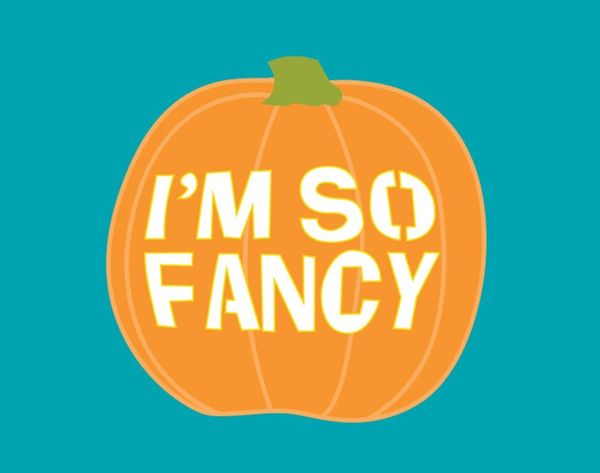 Halloween is, like, basically here. We know the costume is probably your main focus for the holiday, but the night just wont be complete without a glowing pumpkin on your doorstep. Whether you want to try your hand at carving up some advanced designs or just want to cut out a simple face, here are 40 printable templates to help you create a damn good lookin’ jack.

1. So Fancy + #SorryNotSorry Pumpkins: If you’re dressing in one of Iggy’s notorious looks this weekend, it only seems right to carve a coordinating pumpkin. #coolestpumpkinever (via SheKnows)

2. Projection Pumpkin: Why carve one side when you can carve two! Keep things extra spooky by carving a simple “Boo” on the front and a secret scary face on the back that will project on a wall. (via Martha Stewart)

3. Grumpy Cat: Grumpy Cat is no longer just an internet meme. He’s coming to your front porch and he doesn’t look so thrilled about it. (via Grumpy Cats)

4. Olaf: Frozen‘s loveable snowman may never be able to see summer, but you can treat him to his first Halloween! (via Disney)

5. Mockingjay: The new Hunger Games flick is coming out next month. Show your support for Ms. Katniss Everdeen with her trademark mockingjay symbol. (via Pink Ray Gun)

6. Katy Perry: If you’re feeling inspired by this pretty pumpkin, we have all the info you need to dress as the “Dark Horse” singer this Halloween. (via Better Homes and Gardens)

7. Lanterns: It’s a lantern in a jack-o’-lantern… whoa. If your heads can handle this pumpkin inception, here’s an option that requires minimal carving. Most of the detail in this design comes with the black paint. (via Country Living)

8. Basic Black Cat: Whether you’re really into black cats or you’d like one that’s a little simpler than the design featured above, here’s a printable template by yours truly! (via Brit + Co)

9. Ghostbusters: Why carve a basic ghost when you can create an entire scene from the classic flick? This definitely isn’t the easiest choice, but just think about how proud you’ll make Bill Murray. (via Pink Ray Gun)

10. Charlie Brown Pumpkin: We’ll always have a soft spot for Charlie Brown and the gang in their Halloween special. Make your pumpkin great in more ways than one with this design. (via Creative-Type Dad)

11. Star-Eyed Jack: You can’t forget about the classic jack. Keep things traditional for the most part and just give it a slight update with star eyes. (via Brit + Co)

12. Frankenstein: The monster sure looks a lot less scary when his face is carved into a pumpkin. (via Better Homes and Gardens)

13. Hocus Pocus Pumpkin: It’s probably not such a great idea to light the black-flamed candle and bring these mischievous sisters back to life this Halloween, but we think you should be safe carving their faces into a pumpkin and lighting a tea candle — no promises though. (via Buzzfeed)

15. Creepy Text: Flying bats and spooky text make this template simple but still a bit of a challenge. (via DLTK Holidays)

16. Hello Kitty: Apparently she’s not really a kitty, but she can definitely still be a pumpkin. (via PopSugar)

17. Jack Skellington: He might look pretty spooky at first but we all know that the King of Halloween Town is really a nice guy at heart. (via Disney)

18. Sugar Skull: Combine the two spooky holidays into one with a Dia de los Muertos design. Throw on some paint for a little extra Day of the Dead spirit. (via My Emma)

19. Anatomy Pumpkins: Creep to this with our anatomically correct pumpkin decorations. (via Brit + Co)

20. Ninja Turtles: Pumpkin carving works up quite an appetite. After your Ninja Turtle jack-o’-lantern is perfect, go make Leonardo proud and chow down on a slice of pizza. (via She Knows)

21. Caution Signs: Arrange these along the walkway to your door and scare off any timid trick or treaters. Make sure you have some top tier candy for those brave ones that make it all the way to the doorbell. (via Better Homes and Gardens)

22. LEGO Man: Here’s an easy design your LEGO loving little one will be totally proud of. (via Mom and More)

23. Classic Jack: Whether you’re five or 50, this classic, friendly jack-o’-lantern face will be appreciated by all. (via DIY Network)

24. Fancy Font: Ditch the images and celebrate in text. Transfer these onto your pumpkin for carving or if you’re feeling lazy just print and tape them onto a wall! (via Paper and Stitch)

25. Halloween Hello Kitty: If the standard Hello Kitty isn’t festive enough for you, dress her up in an adorable costume. (via Cartoon Jr.)

26. Doge: Take the famous Internet meme off screen and onto your pumpkin. (via Buzzfeed)

27. Funny Face: If you’re not into a spooky kind of Halloween, make things a little less scary and a lot more fun with this silly face template. (via Martha Stewart)

28. My Little Pony: Whether you’re sorting out a pumpkin stencil for your little one or reconnecting with your youth, this design takes the cake for cutest jack. (via Cartoon Jr.)

29. Mummy Pumpkin: This pumpkin isn’t exactly printable per say but it’s so easy you won’t even need one. Simply make cuts in a white pumpkin similar to what’s pictured above and wedge in two black marbles for the eyes. (via Better Homes and Gardens)

30. Pac Man: Grab two pumpkins for this simple, yet memorable design. Make poor Pac-man a mini pumpkin and use a larger gourd for a ghost. (via Fantasy Jr.)

31. Pug Pumpkin: Give your jack a canine kick with this adorable puppy printable. If you decide to go for this design, snap a pic and share it with ModCloth and they’ll donate $5 towards an animal charity of your choice. (via ModCloth)

32. Moon Pumpkin: If you’re after an original design, that’s also totally easy, look no further. The only carving required is a basic crescent shape. All the drama comes when the painted black pumpkin glows orange! (via Midwest Living)

33. Trick or Treat: Similar to the Martha Stewart pumpkin, this jack-o’-lantern is not only awesome in the front, but even cooler in the back. (via Sunset)

34. House Numbers: If you’re hosting a Halloween party, make it easy for everyone to know which house is yours by carving a stack of pumpkins with your address on them! (via Sunset)

35. Faux Bois Pumpkin: Is it wood or a pumpkin? Nobody knows! Achieve this look by scraping the rings with a linoleum cutter, and then make free-form lines to fill in the design. (via Martha Stewart)

36. Beyoncé: Sadly Beyoncé and Jay Z’s epic tour is over, but you can still bring the diva to your doorstep in the form of a jack-o’-lantern. (via Buzzfeed)

37. Witch Hello Kitty: If the costumed Hello Kitty was still not Halloweeny enough take her to the next level with a witch hat and a broom. (via Cartoon Jr.)

38. Nicki Minaj: Our carving knives don’t want none unless you got that Nicki Minaj printable, hun. (via HalloweenCostumes.com)

39. Drake Pumpkin: And you can’t have Nicki’s booty without Drake’s aw shucks face. (via TMZ)

40. Owl Pumpkin: Hoo goes there?! Create this pumpkin to keep watch over all the spooky happenings this Halloween. (via Midwest Living)

BONUS! Emoji Pumpkins: Alright so this option isn’t exactly a carving printable but it is still a printable. If you don’t want to go through all the effort of carving a jack, just print and paste these onto your pumpkin to bring your favorite silly faces into 3D land. (via Brit + Co)

What are you carving out this year? Tweet us your pumpkin pics @BritandCo!