This Stylin’ Bracelet Will Keep Your Phone Charged 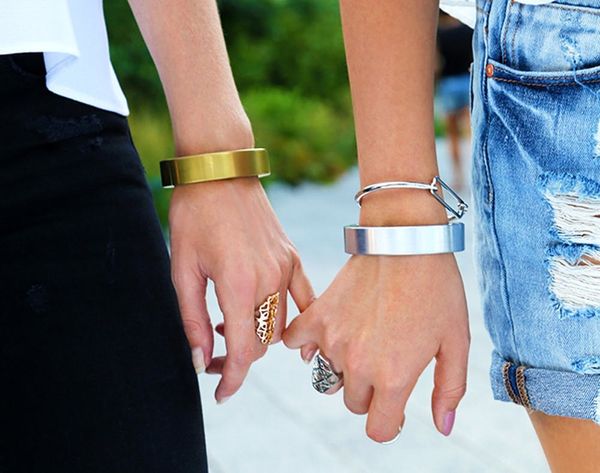 Throughout our adventures into Wearables World we’ve come across rings that buzz to tell you if your beau (or that Tinder match with potential) is texting you, smart shirts that monitor your workout and shoe insoles that get you from A to B with an errand run along the route. Somewhere along the journey, we’ve stumbled upon accessories that do, perhaps the most useful thing for the current state of our “high-tech” lives right now: charge your phone. But they were, um, not that attractive. The QBracelet is here to help, with a stylish accessory that — surprise! — also charges your smartphone.

QBracelet wants to be the wearable you would wear regardless of its superpowers. But until you actually morph into the type of person who leaves their home everyday with a fully charged smartphone, why not use it for both, eh? It has a built-in rechargeable lithium-ion battery that can juice up through a USB port. It unites all of the phone worlds, working for Windows, Android and Apple (hallelujah!) with a micro-USB or Apple Lightning Connector to charge you up to 60% in about an hour. We might not be talking about lightening speed or a complete replacement for your charger, but we are talking about the end of the “sorry phone died :(“ text for good.

When it comes to wearables, fashion and function can be a chicken/egg scenario where it’s only obvious “what came first” if the end product is lacking in one of the areas. QBracelet is both stylish and useful enough to seem well thought out on all accounts. We chatted with COO of Q Designs, Alessandro Libani about the concept and final product and he admits: “both the function and the style of the bracelet were always at the forefront of everything we did.”

They had to make a product that worked, which meant that they had to produce a curved battery that was safe and sustainable. Then, they had to make their concept actually wearable in size and weight. “We were always mindful that if we were going to be successful, we needed to nail the fashion aspect of the bracelet,” Libani tells us. As someone who scours the web and the world for the next haute thing in wearables and as someone who, well, accessorizes with pretty jewelry, I can confirm: Yes. And yes.

Tech-sessories has been mostly a man’s world, with photos of bulky watches and hefty rings modeled on hairy-arm-and-fingered men on most wearables’ product pages and Indiegogo campaign videos, but QBracelet is unisex. And actually looks like something you + your bestie or SO could share. In a range of metallics and mattes, and at the relatively affordable retail price of $99 (though you can pre-order them at a discounted $80 right now), you could probably even justify a set. Judging from the tech-sessory’s lookbook, QBracelet can go from day to night, guy to gal better than Jawbone could ever dream of.

It’s true that we, generation smartphone, want smart homes and connected gadgets that turn any inanimate object into one that “gets” us, but the idea to start simpler, with a basic need implanted in our wearables works for us just as well as our connected kegel trackers do. But still, an innovative design and tech company will probably not rest on battery charging forever, so the “what next?” Q had to be asked — is Q2Bracelet a bangle that charges your phone and buzzes you when your Uber is arriving? Does it vibrate to indicate when your phone needs you to plug it in? Is it something different altogether, like a keychain that tells you when someone’s at the door? Alessandro says that Q Designs won’t focus solely on wearables, nor on devices that charge you up on the go, but they have some “useful and beautifully designed products made for different functions and aspects of our daily lives” in the pipeline. Sounds like a bright, if TBD, future ahead for them (and, hopefully, for our Ringly and Cuff-filled jewelry boxes, too).

What do you think of QBracelet? Is it your favorite wearable yet? Tweet us your thoughts @BritandCo!

Lisa Raphael
In her past professional lives, Lisa has served the masses as the Editorial Director at Brit + Co, Bieber Whisperer at J-14, Golden Girls Fan Club Prez at Lifetime and Talk Show Host Understudy to Katie Couric. Now, she's taking on the sports world at The Relish, teaching Hairography 101 in her spare time and will forever be trying to fill the hole Zayn Malik left in her heart.
Jewelry
Tech
Jewelry Wearable Tech
More From Tech