You’ll Never Believe What This Beautiful Ring Can Do 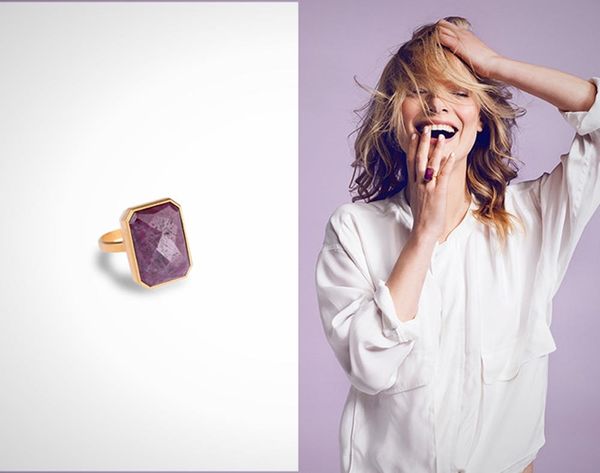 The old saying goes, “If you like it, then you shoulda put a ring on it.” While we tend to agree blindly with the adage, when we’re talking tech-sessories for women, our fingers might actually prefer to go naked. Today, that’s finally about to change. Ringly, the up ‘n’ coming company we’ve been keeping an eye on since we first found them in March is unveiling their very first styles to pre-order. All that glitters in wearable tech is now their natural stones set in 18K plated gold — and all that buzzes is up to you with a fully customizable notification center app.

When we first heard about Ringly, we tried not to get too excited. Wearables for women, cool, we thought. But we had been enticed and subsequently let down by that headline before. We watched a video of the small company’s founder, eBay alum Christina Mercando give a presentation and our skepticism turned into genuine excitement. And hope. She didn’t have any products, just a prototype that looked like a sleek cocktail ring that we would actually — yes, wait… can it be?! Yes! — WEAR. And now, buy.

We visited Ringly’s SF HQ and sat down with Christina to test out the goods and try on the premiere line. Not only are the styles gorgeous on their own, the tech is pretty, too. The chicken and the egg of wearables = the style of the pieces and their hardware. Christina found a look she wanted Ringly to have and worked on fitting the technology into it. Excited by “the hardware part,” she took circuit board classes and jewelry design courses to learn the language of the industry and find partners who believed in her vision and knew their respective stuff. “We could have launched with something much bigger sooner but it was important for me to nail this. At the end of the day I was creating something that I wanted to wear.” Um. We do, too.

Fair warning: Christina promises that once you know what it can do, you’re going to hit moments in your week when you realize how handy a Ringly would be right about now. With the corresponding Ringly Android and iOS app, hit connect, then pair after it finds the ring. Slip it on and tap your finger and thumb together and it will tell you if it’s connected or not. The app is a simple, colorful notification center where you can sync your Ringly to keep you in the loop. Set alerts for phone calls, texts, emails and notifications from apps like Twitter, Facebook, LinkedIn, Uber. There are different color options and different types of buzzes so you can tailor exactly how you’re alerted to specific people or messages. If you move too far away from your phone it will tell you.

With the fashion part nailed, the lucky testers helped Christina with the functionality. Her little sister asked her to hook it up to Tinder so she could get alerted when she got a match. A designer friend who shops for vintage clothing on eBay wanted to know if she could get pinged anytime she was outbid. Another woman who had her phone stolen while she was standing outside waiting for her Uber, wanted it to buzz her when the car arrived. Moms loved Ringly’s peace of mind promise and a heads up if the kids or the babysitter are calling.

Ringly is a streamlined digital experience. It takes your phone off the table and brings you back to real life while still keeping you connected to the rest of your real life that keeps your phone buzzing all day. The rings lasts three days on a single charge and to give them juice (“this is the cute part”) just put them back in their ring box that doubles as a charger at the end of the night. Four styles (black onyx, rainbow moonstone, pink sapphire and emerald) are available now for the special pre-order price of $145 (they’ll eventually retail for $195), and the first 1,000 rings sold will feature a little diamond on the side.

Although we might give the computer hanging off of your glasses or the hefty smartwatch on your wrist a hard time, Christina is much more open-minded about what’s going on in wearables right now. She might be here to address a part of the market no one else is, but she maintains: “I think there’s definitely room for all the players. We see the future of the wearable space like clothing is today… there are so many different clothing brands out there. It’s what you wear on your body, it’s how you present yourself to the world. And you don’t want to wear the same exact thing every single day. Our strategy looking forward is that we want people to buy multiple different rings to match their outfit.”

And Ringly isn’t JUST here to revolutionize wearables for women. Christina and her crew are equal opportunity innovators. “Our mission is to create products that are both stylish as well as useful — so things you would want to wear even if it didn’t have any technology. I think men want to look stylish, too!” If you’ve ever waited in line for the bathroom at a tech conference then, well, you’re probably a dude. (Proof from last week’s WWDC.) Tech isn’t a man’s world, but there’s significant room for women to make more of a mark. Christina admits: “When we went out to raise money, a lot of our investors were men and all of them that decided to invest in us all had to go home and ask their wives. And their wives really wanted it so they were like, ‘Yeah, we’re in!’” She is already working on what’s next (bracelets!) including, yes, stylish tech-cessories for men thinking “natural elements for men, leather or even wood.” Hear that, guys? Ringly’s got your back and your wrist, so you can politely put away the gummy bracelets and giant rings.

With the recent end of Nike Fuelband and speculation that all wearables will eventually fall into two categories, Apple or Google, Christina still sees Ringly having its own, unique place. “I don’t think either of them are going to do cocktail rings,” she laughs. True, and even if they do, we would rather you guys take care of that anyway.

Would you wear Ringly? What do you think about wearables in general?

Lisa Raphael
In her past professional lives, Lisa has served the masses as the Editorial Director at Brit + Co, Bieber Whisperer at J-14, Golden Girls Fan Club Prez at Lifetime and Talk Show Host Understudy to Katie Couric. Now, she's taking on the sports world at The Relish, teaching Hairography 101 in her spare time and will forever be trying to fill the hole Zayn Malik left in her heart.
Jewelry
Tech
Jewelry Wearable Tech
More From Tech