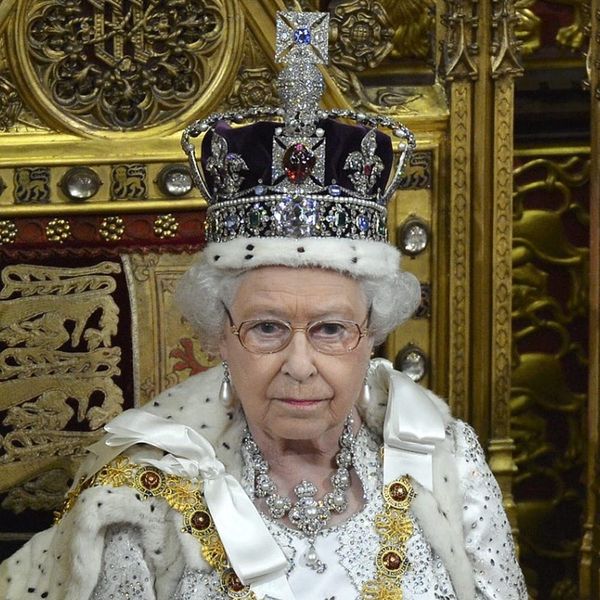 Normally, Queen Elizabeth II is a bit of a stickler for tradition (See the GIF of her scolding Prince William for taking a knee for the Trooping the Colour event as proof). Not that we blame her: She’s been practicing regal customs since birth, so it’s no surprise she’s partial to them. For the upcoming State Opening of Parliament, however, the queen will break tradition for the first time in 43 years.

Normally, the event is quite the formal affair, with the queen, 91, donning her finest Robes of State and a two-and-a-half pound Imperial State Crown. This year, however, election disarray has thrown a wrench into HRH’s stylish plans. Being held on what sources tell Telegraph is “the first suitable date after the election,” June 19, it now comes two days after the annual Trooping the Colour, leaving what the State Opening says is “too little time for rehearsal for an event of that scale.”

“To allow Her Majesty to attend in support of the parliamentary and constitutional process, the Queen’s program of engagements has been revised,” read a Royal statement. As a result, she will be traveling by car rather than carriage and ditching her traditional ensemble in favor of a more low-key “day dress” and hat, with a state officer touting the crown instead.

It’s the first — and only — time the change has been made since 1974, leaving some to speculate that her age is a factor. Royal sources, however, say that’s simply not the case, with plans to return to fashionable business as usual next year.

Will you be bummed to see the Queen taking things down a notch this year? Tell us over @BritandCo.

Nicole Briese
Nicole is the weekend editor for Brit + Co who loves bringing you all the latest buzz. When she's not busy typing away into the wee hours, you can usually find her canoodling with her fur babies, rooting around in a bookstore, or rocking out at a concert of some sort (Guns N' Roses forever!). Check out all her latest musings and past work at nicolebjean.com.
Royal Family
Celeb Style
Royal Family
More From Celeb Style