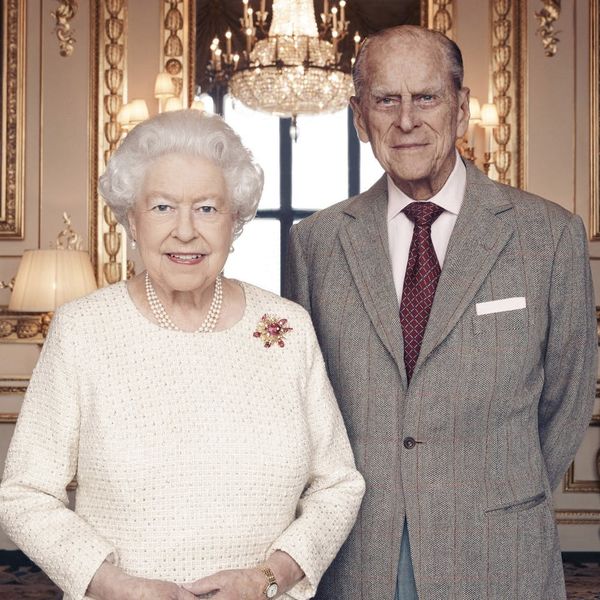 All eyes may be on Prince Harry and Meghan Markle’s potential future engagement, but today, Her Majesty The Queen and His Royal Highness The Duke of Edinburgh mark a major relationship milestone of their own: 70 years of marriage. To celebrate, Queen Elizabeth II bestowed upon Prince Philip an honor that only she can give.

The Queen made Philip, 96, a Knight of the Royal Victorian Order. Buckingham Palace made the announcement today, saying that the honor is awarded personally by the Queen for services to the royal family.

A dinner party in honor of the 70th anniversary milestone will take place with friends and family at Windsor Castle, and new portraits of the Queen and the Duke have been released for the occasion. The photos were taken by British photographer Matt Holyoak in the White Drawing Room at Windsor Castle in early November.

In some of the shots, the royal couple is pictured against a platinum-textured backdrop to signify the traditional platinum anniversary affiliation for 70 years.

Tomorrow Her Majesty The Queen and The Duke of Edinburgh will celebrate their 70th Wedding Anniversary as more new photographs are being released. British photographer Matt Holyoak of Camera Press, took these new images in the White Drawing Room at Windsor Castle earlier this month. On 9th July 1947, the engagement of the then Princess Elizabeth to Lieutenant Philip Mountbatten was announced. Their wedding ceremony took place at Westminster Abbey on 20th November 1947. Find out about The Queen and The Duke of Edinburgh's wedding day by clicking on the link in the bio.

Then-Princess Elizabeth married Lieutenant Philip Mountbatten on November 20, 1947, just four months after getting engaged. The ceremony, which was held at Westminster Abbey, welcomed 2,000 guests and was broadcast to some 200 million people around the world on BBC Radio.

“He has, quite simply, been my strength and stay all these years,” the Queen said of her husband 20 years ago for their 50th anniversary. “I, and his whole family, and this and many other countries, owe him a debt greater than he would ever claim, or we shall ever know.”

What do you think of the Queen’s gift to Prince Philip? Let us know @BritandCo!