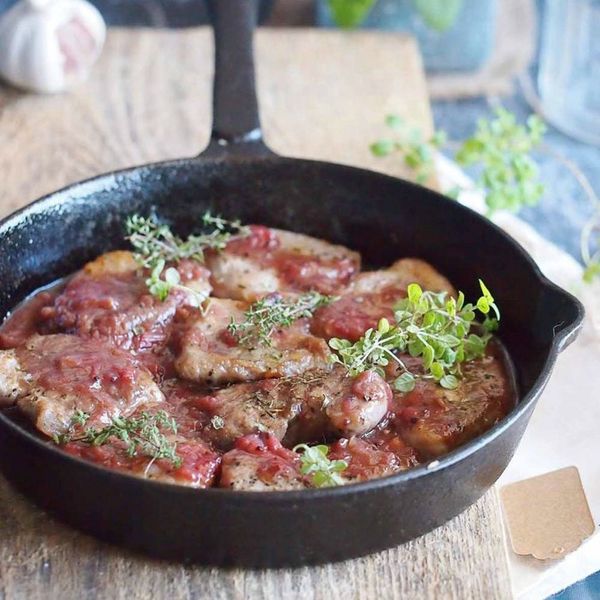 Pork tenderloin is proof that you don’t have to rely on chicken breasts alone for quick and healthy meals on the fly. And once you have your first juicy, tender bite, you’ll wonder why you let yourself suffer through so much dry meat in the past. Pork is incredibly versatile — it’s pretty amazing that we can get bacon desserts and pork chop dinners from the same meat. The tenderloin is just as easy to transform. Experiment with your favorite flavors and cooking techniques in these 15 recipes, but either way, you’re sure to come out on the other side as a fan of this under-appreciated cut of meat.

Don’t be afraid to use bold ingredients when cooking with pork. Espresso powder, brown sugar, and spices season each bite, all the way to the center of the roast. (via Let’s Taco Bout It)

Keep your meat moist by soaking it in a zingy marinade, in this case, honey-mustard. Then, a pecan crust keeps the exterior nice and crispy. (via Ally’s Cooking)

Pork tenderloin is rubbed with a seasoning that becomes a glaze in this recipe. Apples are added near the end of cooking, bringing a freshness to the dish that helps the brown sugar from becoming too cloying. (via Le Creme de la Crumb)

Turn a classic flavor pairing on its head and swap honey for orange marmalade in the mustardy sauce. It’s sweet, citrusy, and punchy enough to stand up to a hearty roast. (via Simply Stacie)

Rather than spending more on prepared stir-fry meat, purchase a larger cut and butcher it yourself. This recipe cooks up quickly, so you can get your Korean food fix at home just as easily as heading to a restaurant. (via Jo Cooks)

Za’atar, a spice mixture made from an herb that tastes like a cross between thyme and oregano, brings an earthy flavor to this one-pan meal. You cook the meat and veggies together for an easy dinner. (via My Kitchen Love)

Sometimes, the most unexpected flavor combinations come together to create magic. In this case, lime and maple syrup make for a balanced, tenderizing marinade that’s enhanced by tons of garlic and a little oregano. (via Peas and Peonies)

Thick, juicy slices of grilled pork make for a stellar sandwich. Top each one with a crunchy, tangy slaw for harmony in each bite. (via Buy This Cook That)

If you really want to impress your dinner party guests, stuff whatever it is you’re serving. One look at the pear and Gruyere tucked inside this tenderloin, and they’ll be convinced that you’re a pro. (via Cali Girl Cooking)

Double down on charred flavors from the grill with this dish. First, grill your meat, and then some lemons, to bring a smokey flavor to the bright and herbal chimichurri sauce you drizzle on top. (via Platings and Pairings)

It seems gourmet, but there’s a secret to getting this meal on the table quickly. Just choose pre-seasoned pork tenderloin at the store, and then make a homemade sauce to freshen up your plate. (via Buns in My Oven)

It’s a double pork bonanza in this bold meal. Keep things from getting too savory by adding a maple and brown sugar topping to the mix. (via The Gold Lining Girl)

Ripe blackberries add an unexpected but welcome sweetness to this tenderloin. Fresh rosemary brings a woodsy, herbal balance to the fruity flavors. (via Certified Pastry Aficionado)

Tangy rhubarb is usually seen in desserts, but in this recipe, it brings a bracing tartness to tender pork medallions. (via Karmelowy)

We all grew up eating chicken pot pie, but other meats work just as well when placed inside a buttery, flaky crust. The key is using pork tenderloin, which doesn’t require an overly long cooking time to become tender. (via Panning the Globe)
Justina Huddleston
Justina Huddleston is a food writer living in Los Angeles. When she's not busy writing, she spends her time in the kitchen creating both virtuous and decidedly junky vegan food. Buffalo chickpea pizza, anyone? She's also been known to eat a plain block of tofu or beans straight out of the can for lunch, but somehow those culinary adventures don't make it to her Instagram. You can follow Justina on Twitter or see what's cooking in her kitchen on her blog, A Life of Little Pleasures.
Recipes
The Conversation
Reviews:
More From Recipes