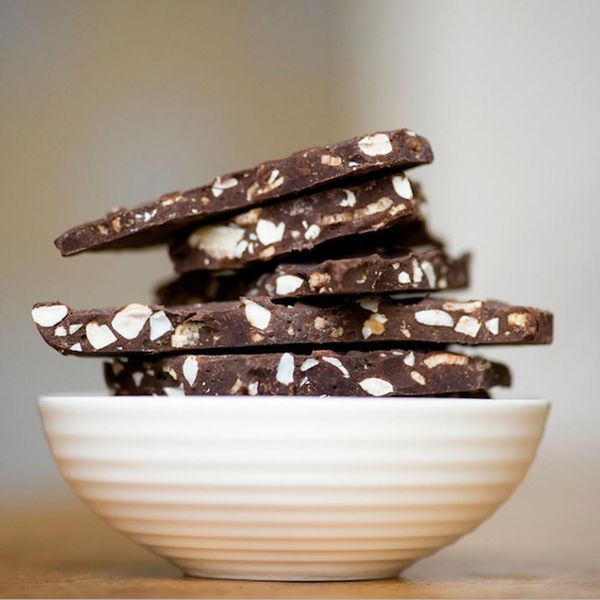 Everyone loves the holidays. Everyone loves bacon recipes. Everyone loves seasonal desserts. So naturally, the logical thing to do is combine these three beloved concepts into one genius combination: Christmas desserts… WITH BACON. This holiday season, pull out all the stops so your guests will no longer have to choose between sweet and savory. These 14 recipes are just sugary enough to qualify as dessert, but they’re also graced with the meaty and salty flavors of America’s favorite breakfast meat. You’re welcome.

1. Maple Bacon Fudge: You’ll soon realize that maple and bacon are a remarkable combination. Trust us — there will be more than a few desserts on this list featuring the combo. Pro tip: When candying bacon, use the thickest meat you can find. (via Ashlee Marie)

2. Chocolate Bacon Peanut Bark: Chocolate and peanuts are also a fab combo, and this bark recipe shows it off. Be sure to go for unsalted peanuts, though, as the bacon will make this flavorful treat salty enough as it is. (via Framed Cooks)

3. Peanut Butter Caramel Bacon Monkey Bread: Monkey bread is a soft, sticky, sugary pastry that’s often served either for breakfast or dessert. This iteration adds peanut butter and caramel to the mix, making for a particularly gooey and delicious treat. (via A Dash of Sanity)

4. Bacon Dark Chocolate Bark With Salted Coconut Caramel: If you’re a holiday bark fan, this recipe will be right up your alley. In addition to (healthy) dark chocolate and (not-so-healthy) sweet caramel, this bark showcases the flavors of bacon and coconut. (via LeelaLicious)

5. Whiskey Bacon Baked Donuts: This one’s a twofer… You could either have this for breakfast on Christmas morning, or serve them as a holiday dessert. Bonus: They’re baked instead of fried, which means they’re *kind of* healthy, right? (via Healthy Aperture)

6. Whiskey Marshmallow and Caramel Bacon Bark: This caramel- and marshmallow-based bark throws an extra-interesting ingredient into the mix: whiskey. Pro tip: Be sure to bring the bark to room temperature before cutting it into servable pieces. (via Bakers Royale)

7. Maple, Bacon and Pumpkin Tart: This recipe has all of the flavors of the season, with fresh pumpkin spread atop fluffy, doughy pastry bread. Buying a store-bought pastry will be a major time-saver, but you’re free to make your own if you’re up for it. (via RecipeTin Eats)

8. Candied Bacon and Nuts: If you’re looking for a dessert that you can munch on all evening, this is it. Plus you can sub out the cinnamon, nutmeg, all spice and ground ginger for one simple ingredient: pumpkin pie spice. SCORE! (via RecipeTin Eats)

9. Maple Bacon Cupcakes: We told you the maple-bacon combo would be showing up a lot. Believe it or not, this scrumptious recipe is a copycat of the bacon cupcakes sold at Disney Epcot’s pop-up restaurant. (via Ashlee Marie)

10. Maple Candied Bacon: Keep things simple with this sweet and delicious candied bacon. It’s the perfect combination of dessert and finger food. Thick-cut bacon, maple syrup and brown sugar are all you need to make this no-frills holiday dessert. (via Closet Cooking)

11. Beer and Bacon Brittle: This recipe calls for bacon, sugar, butter, pecans, cayenne pepper and… beer! We recommend a chestnut brown ale or similar variety, but you can use whatever kind of brew strikes your fancy. (via Brooklyn Brew Shop)

12. Maple Bourbon Bacon and Pecan Butter Tarts: Speaking of bacon- and booze-infused noms, these butter tarts employ the rich, dark flavors of bourbon. You can make them muffin-sized or a little larger, but feel free to spring for store-bought pastry dough to save time and energy. (via Closet Cooking)

13. Salted Maple Bacon Truffles: In case you thought the bacon was only meant for sprinkling atop these babies, think again. There’s also bacon baked right into the fluffy, decadent center of these super-sweet truffles. (via Jo and Sue)

14. Bourbon Bacon Brittle: This sweet, crunchy, caramel-y brittle is perfect for passing around the tree on Christmas Eve. This brittle would be a SUPER yummy addition to a bowl of popcorn, so don’t be afraid to make a double batch for movie night. (via What Molly Made)

Maggie McCracken
Maggie is a writer and editor based in Chicago (but constantly traveling). She writes primarily about wellness, mindfulness, astrology, and healthy living, and has a background in fitness and yoga instruction.
Christmas
Dessert Recipes
Christmas Christmas Recipes recipe roundup
The Conversation