How to Make Healthy Quinoa Cakes With Ricotta Fig Bruschetta 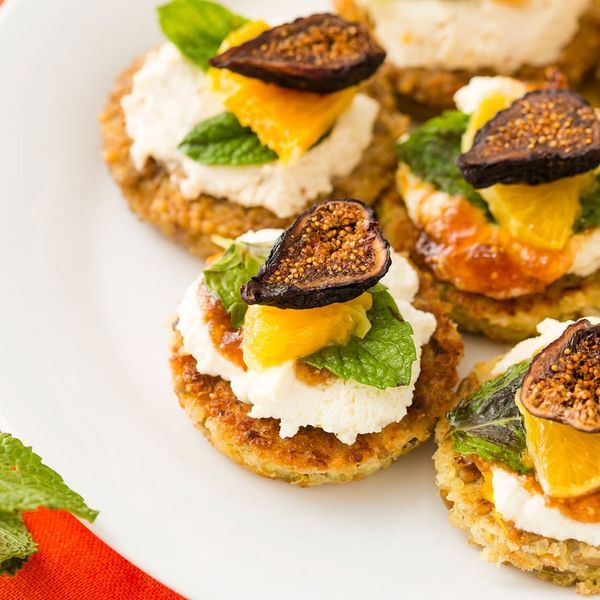 Innovation in the kitchen is no easy feat. But when you have a flavor combination that really works, we find it’s actually quite easy to get creative within those constraints. So we’ve teamed up with Curate Snacks to test the theory. When we tried Curate’s bars, each of which contain unexpected flavor combinations and are SO tasty, we thought we’d use those flavor profiles as inspiration for a new savory recipe. Enter Curate’s Dark & Tempting bar: a sweet and savory combo of Mission Figs, orange, balsamic vinegar, hazelnuts, sunflower kernels and quinoa. After tinkering in the kitchen a bit, the sunflower-quinoa cake with fig and ricotta bruschetta was born. Think of it as a deconstructed, reconstructed recipe that’s also gourmet, healthy and hearty. And delicious. Check it out!

Scroll on for the recipe.

1. Preheat the oven to 375 degrees Fahrenheit. Combine the ricotta, olive oil and egg in a medium bowl and stir until consistent.

2. Transfer the ricotta mix to a bakeable bowl. Make an indent in the center of the ricotta and add the fig preserves. Sprinkle the top with orange zest, then bake for 25 minutes.

Combine the ricotta, olive oil and egg in a medium bowl and stir until consistent.

Transfer the ricotta mix to a bakeable bowl. Make an indent in the center of the ricotta and add the fig preserves. Sprinkle the top with orange zest, then bake for 25 minutes at 375 degrees Fahrenheit. Onto the quinoa cakes!

We’ve gotta say, the sunflower kernels really took the quinoa cakes to the next level. They’re really, really tasty when paired with parmesan and garlic.

Mix until combined. Shape them into patties using a mason jar lid, then bake at 375 degrees Fahrenheit for 15 minutes.

If you’d prefer to pan fry these quinoa cakes, fry them at medium high heat in a little olive oil, then shape them with a mason jar or mason jar lid. Now onto the mint orange salad!

This citrus-y, bright salad brings a satisfying fresh bite to the whole recipe.

Zest an entire orange. Peel and discard the excess orange peel, then break it into three-wedge portions. Make perpendicular slices.

Separate mint from stems into a large bowl.

Combine the juice of half an orange, balsamic vinegar and olive oil into a smaller bowl and whisk until combined.

Combine the orange slices, mint and dressing and lightly toss with your hands.

Add a dollop of ricotta spread, fig preserves, a sprig of mint, a slice of orange and top with half a fig.

And they’re really pretty, too!

Thanks for the inspo, Curate!

Will you try this recipe? If so, we want to see the results! Share a picture on Instagram with the hashtag #iamcreative and #TasteCurate so we can take a look.