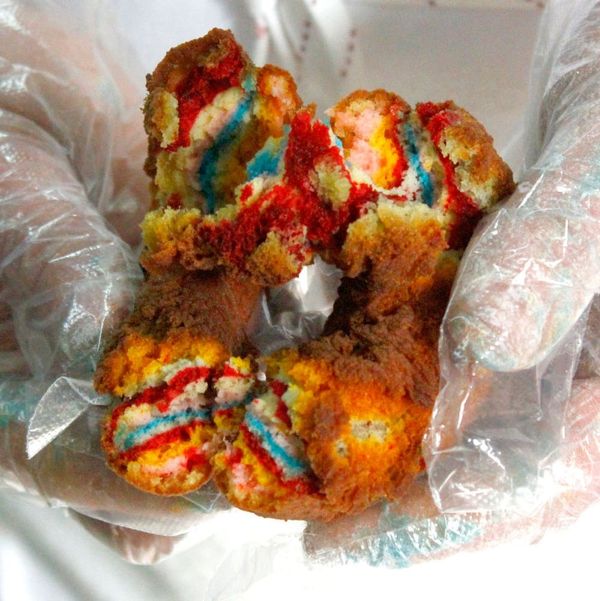 We hate to break it to you, but if you’re still eating carbs that aren’t multicolored, you might just be doing it wrong. First came the mind-boggling rainbow bagel, and now please allow us to introduce you to the next interpretation of multicolored breakfast food: the rainbow DONUT.

Sold at the relatively new donut shop Moe’s Doughs in Brooklyn, the signature rainbow donut isn’t just multicolored, it’s multi-flavored. Included in this swirled masterpiece are red velvet, strawberry cake, blueberry, sour cream, orange and pistachio flavors. Zeyah Saleh, the manager at Moe’s Doughs and son of the shop owner, explains the taste has been described as similar to that of Fruit Loops.

After we realized how epic Moe’s rainbow donut-making process is, we decided to head to the shop and get a behind-the-scenes look at the process behind this creative and colorful treat.

Mohamed Saleh, the shop owner and master baker at Moe’s Doughs (he was previously the baker at Peter Pan Donuts in Brooklyn for about 20 years), first begins by creating the dough via his top secret recipe. After it’s been combined in a massive mixer and infused with each flavor, he begins folding.

While the colors are certainly vivid, they definitely don’t have quite the saturation of The Bagel Store’s similar product. That’s because while food coloring is involved, they rely most on natural flavors at Moe’s.

Next up: the layering process. Mohamed slightly flattens each mound of dough with his hands and combines them into one giant mound.

In the end, you’re left with something resembling a Play-Doh masterpiece.

Moe then rolls the pile out and begins using a donut cutter to give them that classic donut shape.

Next up: a crucial step for all delicious donuts – deep frying. In the oil is where the colors begin to really pop.

After allowing them to slightly cool, Moe (very generously) drizzles them in a sugar glaze.

And voila! From the outside, the donuts look like they might just be your standard cake donut. But break those babies open, and BAM! Sorry Skittles, but this might just be the best way to taste the rainbow.

Our thoughts? Well, we’re having a hard time actually forming words because we’re too busy stuffing our faces. Moe’s Doughs rainbow donut is perfectly crispy, sweet but not too sweet and totally mesmerizing to look at.

Zeyah tells us that since they unveiled the new flavor just last week, they’ve been bombarded with people coming in to give it a try, and they’ve been selling out around 3PM every day. So, if you’re in the NYC area and looking to get your hands on one of these, you may want to head over early.

But hey, if they’re all sold, out don’t sulk for too long. Instead, try some of Moe’s Doughs other creative flavors, like their Samoa-inspired donut or their take on the Cronut, the dosonut. Also, keep an eye out for the cream crumb donut that’s sometimes topped with rainbow donut pieces. Actually, you know what? At $2 for the rainbow donuts and just $1.50 for all the rest, you should probably just go ahead and get them all.

What crazy, new food trend are you super excited to try? Share with us on Twitter @BritandCo.

Cortney Clift
Cortney is the senior writer and special projects editor at Brit + Co. She typically covers topics related to women's issues, politics, and lifestyle. When she's not buried behind her computer you'll find her exploring New York City or planning her next big adventure.
Food News
The Conversation
More From Food News