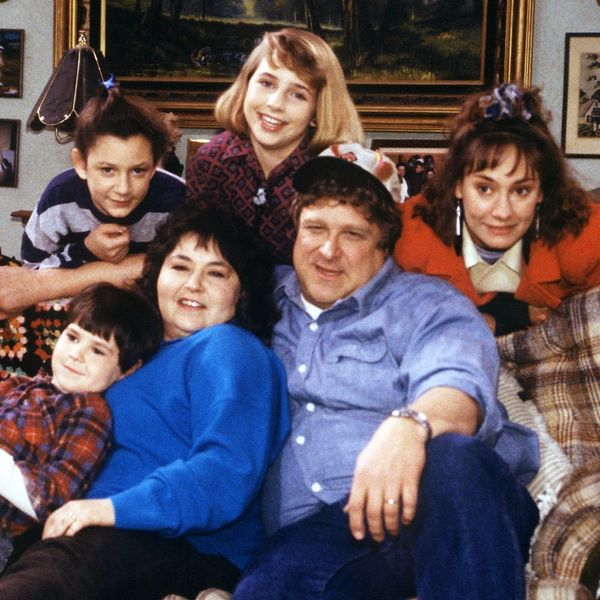 Earlier this fall, ABC announced they would be bringing the iconic hit sitcom Roseanne back to the airwaves, adding to the already exciting list of TV reboots — Will & Grace, Roswell, etc. Now we’re getting our first look at Roseanne‘s Conner family in action again, and the nostalgia overload is VERY real.

#Roseanne is coming back to ABC in 2018! Here's a look at the first table read! pic.twitter.com/Nzh8Pn7vK4

The official @RoseanneOnABC Twitter account shared two photos of the cast taking part in their first script reading. Many of the familiar faces from the original show are pictured — Roseanne Barr, of course, as well as Laurie Metcalfe (who played Roseanne’s high-strung sister Jackie), Sara Gilbert (Darlene Conner), Michael Fishman (D.J. Conner), Lecy Goranson (Becky Conner), Sarah Chalke (who played Becky in the later seasons and will be playing another role this time around), and even John Goodman, whose character Dan Conner died in the series finale. We’re going to assume that, much like the way the Will & Grace reboot pretended its series finale never happened, the Rosanne peeps will get creative with this one.

There are some new faces pictured as well, including young actors seated next to Gilbert and Fisher (likely playing the characters’ children), as well as Emma Kenney, who will play Sara and David’s daughter. Notably missing is the Big Bang Theory‘s Johnny Galecki (David), but according to an earlier interview with Gilbert, talks are underway to bring him back.

The first table read comes RIGHT in time for the 29th anniversary of the show’s original premiere on October 18, 1988. ABC says the show will return in 2018.

Will you watch the Roseanne reboot? Let us know @BritandCo!