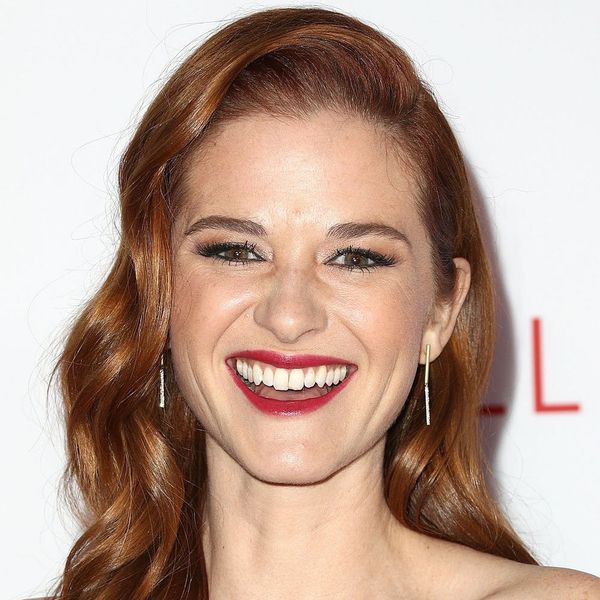 Since March, we’ve know that Sarah Drew, AKA Dr. April Kepner, would be leaving Grey’s Anatomy. Between her emotional tweets and the touching farewell she received from Ellen Pompeo, we’ve been experiencing all kinds of feels, but Drew’s latest slew of posts really pushed us over the edge.

Taking to Instagram for a farewell tour of sorts during her last day filming on set, the 37-year-old actress did a number on fans’ heartstrings.

She kicked things off with a tribute to her onscreen love, Jesse Williams, writing, “Jesse and I had some very trying stories to tell over the years and there were many moments when we really needed to lean on each other to get through them. And we did.”

Then came a photo of her surrounded by her lovely cast mates, namely Jessica Capshaw, Caterina Scorsone, Kelly McCreary, Kevin McKidd, and Jesse Williams, whom she dubbed “some of my favorite people on the planet.”

“As I was looking up at all of these beautiful faces, smiling down at me with so much love, happy to see April alive and well, I was overcome with sadness about the reality of not being with all of these people in the same place in the same way ever again,” she revealed “But, I was ALSO overcome with the joy of having had the opportunity in my life to know such gorgeous people whom I have loved, who have loved me so well for nine years.”

She continued on to describe the experience, saying, “During a break in the scene, I felt the tears coming and I looked over and made eye contact with Caterina and Chandra and they whisked me away and let me feel my feelings all over them,” she added. “It was such a sweet moment of friendship… I keep describing my experience over the last two months as being ‘love-bombed’ because between the conversations, the hugs, the letters, the tweets, the plane(!), that’s truly what I’ve felt. Love-bombed.” Awwww!

Those “love bombs” came from everyone from fellow actress Chandra Wilson, who Drew wrote a special tribute to, to writer Bill Harper, who she thanked for writing “such a gorgeous tribute to April. It captures who she is and what she means to the people in her life, and I felt like she was profoundly loved through it.”

Are you sad about Sarah Drew leaving Grey’s Anatomy? Tweet us @BritandCo.