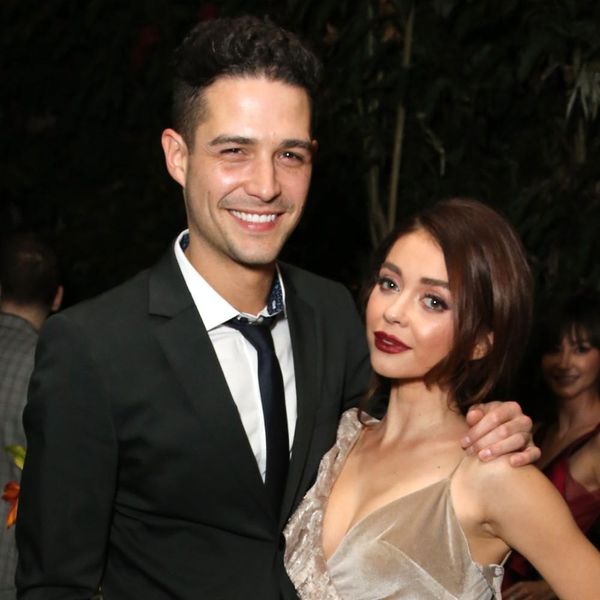 Wells Adams and Sarah Hyland’s relationship is still going strong several months in. He’s even met her family — although, as Hyland shared in a new interview, that happened way earlier than she expected and wasn’t exactly planned.

“He met my [IRL] family before the TV family,” the Modern Family actress revealed during a visit to The Late Late Show With James Corden on Monday. “My parents and my brother were living with me for most of fall time last year. And so — he lives in Nashville — so he flew out [from] Nashville, it was like our second or third date, and my mom, like … They were supposed to leave. I was like, ‘Can you please leave the house? I’ll pay for you to go to a nice dinner or something.’ And they were running behind.”

That’s why, when the 33-year-old Bachelor in Paradise star showed up, Hyland’s mom did what she could to salvage the situation. “So, the doorbell rang and I was upstairs and I didn’t know, and my mom apparently answered the door [covering her face and] saying, ‘You’re not supposed to see me. I’m Melissa. Come in. Sarah’s upstairs,'” Hyland said, imitating her mom’s voice and gestures. “He told me that and I was like, ‘Oh my gosh.'”

However, she said that the situation might have actually paid off, admitting, “He met my entire family, like immediate family, right away off the bat, which I think is great because now I know he really likes me because he’s still here.” He sure is — and by the looks of it, he’s not going anywhere anytime soon.

Do you have a funny story about meeting a significant other’s parents? Let us know @BritandCo!

Desiree O
Desirée O is a ‘Professional Bohemian’ who loves anything and everything related to the arts, entertainment, and pop culture. She ADORES being a ‘Newsy’ for Brit + Co, covering all of the latest tidbits of awesomeness that you want to read about. When she’s not writing, she’s either making messy art, going on long adventurous walks with her camera, or poking around over at bohemianizm (http://www.bohemianizm.com/). You can find out about Desirée O and her work at http://DesireeO.com/ or follow her on Twitter @DesireeO.
Celebrity Couples
TV
Celebrity Couples TV
More From TV