19 Gruesome Halloween Food Recipes That Will Freak Out Your Friends 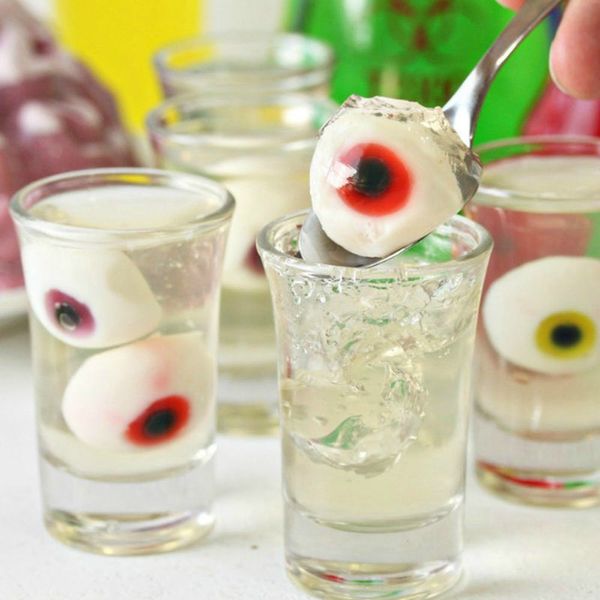 You’ve sent out the haunted house invites and combed through Pinterest and YouTube for the most ghoulish makeup. Your corpse bride costume is at the ready and you’ve got a boozy halloween cocktail bar planned that will be utterly Insta-worthy. All you need now to really *freak* out your friends is a seriously creepy food spread. Intestine sausage platters, bony finger cookies and edible eyeballs, anyone? Scroll on for 19 seriously spooky Halloween foods that’ll have them shaking in their shoes.

1. Silly Apple Bites: I don’t know what’s more ghastly about these green monsters. It’s a tough choice between their lashing tongues or rotting teeth! Kids young and old will scream at the sight of them. (via Fork and Beans)

2. Floating Eyeball Jello Shots: Nothing is more gruesome than eyeballs floating in a sea of gelatinous matter. These shots are kid-friendly, but you can easily add your favorite liquor to the mix. (via SugarHero)

3. Meatball Mummies: It’s rare to find a good Halloween recipe that’s an actual entreé and not a treat. This recipe is jump-started with store-bought meatballs and frozen pizza dough, so it’s easy-peasy to pull off. The homemade edible eyeball recipe is included. (via Spend With Pennies)

4. Monster Claw Cupcakes: These creepy cupcakes look like they’ve been clawed by a baby monster. But one bite into the homemade marshmallow fondant and you will brave your life for more. (via Bakingdom)

5. Vampire Apple Teeth: This one’s for the clean eaters in the house. These devilish apple-peanut butter snacks are waaaay more wholesome than they look. Don’t let the almond and cranberry fangs scare you. (via Half Baked Harvest)

7. Spooky Worm Halloween Jello: Nothing is as creepy as a dessert plate filled with gross worms and spider eggs. This disgustingly delicious treat will be the hit of the party. (via A Spicy Perspective)

8. Eye-Popping Cake Pops: Yucky eyeball cake pops are even more gorey when served up on the tines of a fork. But rest assured, they are so delicious that your friends will be shoveling them down the hatch without remorse. (via Bakerella)

9. Bloody Candy Apples: The apple that poisoned Snow White could not have been more dangerous looking than this. Tie them up with a *bloodied* ribbon to give your friends the full effect. (via 1 Fine Cookie)

10. Dead Man’s Toe Cake Bites: Can you bring yourself to bite into a swollen, fleshy gray toe kabob? Those who are brave enough to bite will find every single white-chocolate boney digit is utterly delectable. (via Bakingdom)

11. Diablo Eyeballs (Taco Meatballs) and Black Bean Pasta: This black and orange main dish is the perfect ghoulish entreé to serve up on Halloween night. Everyone in the house is going to beg for seconds. (via Boulder Locavore)

12. Body Part Cake Bites: These zombie brains are made of red velvet cake that’s so lifelike, kids young and old will scream with delight. They’re as fun to look at as they are to eat. (via Bakingdom)

13. Deathly Chocolate Graveyard Cakes: These chocolate graveyards are so macabre, but it won’t stop your guests from gobbling up every chocolate brownie-pudding bite. Save the crunchy witch boot pirouettes for last; they’re so deliciously eerie. (via Half Baked Harvest)

14. Ribs & Sausage “Entrails”: If you live to gross out your guests, this meat platter is for you! An image you won’t forget, it does double-duty as both party food and decoration. (via Not Quite Nigella)

15. Mummy Cookie Bites: What’s not to love about these yummy mummies? They’re as much fun to make as they are to eat. (via The Recipe Critic)

16. Red Velvet Hot Chocolate and Almond Witch Finger Cookies: We’ve all seen witch-finger cookies before, but these are extra special. The nails are candied almonds and the blood is red velvet hot chocolate. How can something so super gross be so delicious? (via SugarHero)

17. Red Velvet Skull Cakes: These gorgeous little skeletons with the wacky Dia de los Muertos piping could not be more perfect for your Halloween shindig. They’ll be the star of the dessert table for sure. (via Shore Society)

19. Chorizo & Cheese “Intestines”: These philo-filled babies look super-gross, but the spicy sausage and cheese makes them absolutely delicious. Be sure to roll yours up nice and twisty to mimic real intestines. (via Not Quite Nigella)

Sally Jones
Sally Jones is a writer and editor living in New York City. She has worked at many websites including iVillage, Ladies Home Journal, More, Parenting, Cosmopolitan, The Knot and YourTango, in jobs ranging from editor to COO. Renovation and interior design are her unhealthy obsessions hobbies. She has renovated every home she's lived in, including the rentals, and like... whoa, who does that? You can catch her at her blog Renov8or.
Halloween
Recipes
Halloween Halloween Party Ideas recipe roundup
The Conversation
Reviews:
More From Recipes