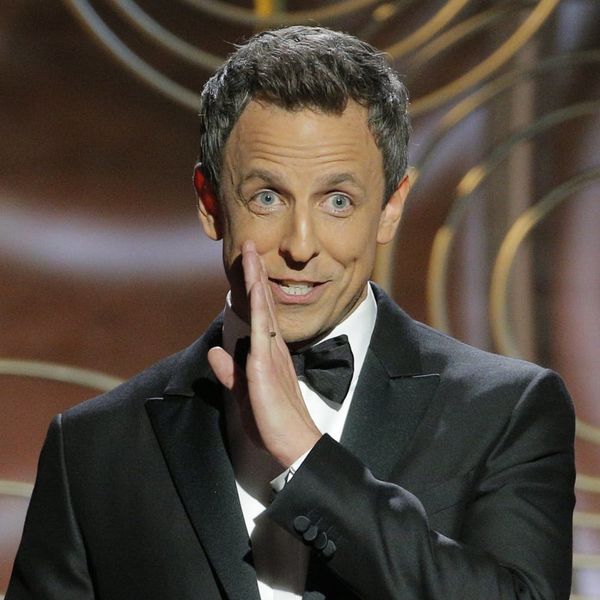 There was a bit of head-scratching when the Hollywood Foreign Press Association announced that the 2018 Golden Globes would be hosted by Late Night host Seth Meyers, but the Saturday Night Live alum hit the ground running with his opening monologue, pulling no punches as he talked about politics, entertainment, and — of course! — the movement in Hollywood against sexual harassment and misconduct.

“Good evening, ladies and remaining gentlemen,” Meyers deadpanned. “Happy New Year, Hollywood! It’s 2018, marijuana is finally allowed, and sexual harassment finally isn’t. This was the year of big little lies and get out and also the television series Big Little Lies and the movie Get Out.”

Meyers then talked about how the tides are changing in Hollywood, quipping, “There’s a new era underway and I can tell, because it’s been years since a white man has been this nervous in Hollywood.”

The former Weekend Update host also joked that it’s hard for men in Hollywood these days, saying, “For the male nominees in the room tonight, this is the first time in months it won’t be terrifying to hear your name read out loud. ‘Did you hear about Willem Dafoe?’ ‘Oh, God, no! ‘Oh, he was nominated.’ ‘Don’t do that! Don’t do THAT!'”

He went on to poke fun at himself for being a male host in a year that’s all about women, before making a joke at the expense of the president and then landing a real zinger on disgraced Hollywood heavyweight Harvey Weinstein.

“Harvey Weinstein isn’t here tonight, and well, it’s because I heard rumors that he was crazy and hard to work with. But don’t worry — he’ll be back in 20 years as the only person booed at in the in memoriam.” When the audience responded with gasps and boos, Meyers cracked, “It’ll sound like that.”

The new dad also called out Kevin Spacey, mentioning his replacement, Christopher Plummer, who is nominated for All the Money in the World. “Well, despite everything that happened this year, the show goes on. For example, I’m happy to hear they’re doing another season of House of Cards. Is Christopher Plummer available? I sure hope he can do a Southern accent, because Kevin Spacey couldn’t.” Again, the crowd gasped, and Meyers replied with the punchline, “Oh, was that too mean, to Kevin Spacey?”

Meyers later praised Cecil B. DeMille award recipient Oprah Winfrey, telling her, “What a tremendous honor for Cecil B. DeMille.” He also did a special edition of his “Jokes Seth Can’t Tell” segment from Late Night, with a special appearance by Amy Poehler, who did a “reclaiming my wine” joke honoring California representative Maxine Waters’ now-famous “reclaiming my time” speech).

Meyers closed his opening monologue by honoring the women in the room and saying how excited he is for the changing tide in Hollywood. “People in this room worked really hard to get here, but it’s clear that the women had to work even harder,” he said. “I look forward to you leading us into whatever comes next.”

What did you think of Seth Meyers’ Golden Globes opening monologue? Let us know @BritandCo!

Kat Armstrong
Kat has been a writer, social media maven and mom for longer than she's willing to admit. She's also spent time in front of and behind the camera, interviewing celebs, politicians and acting as a producer for fashion and artistic photography shoots. When she isn't writing for various orgs and publications, she's hanging with her kids, husband and French Bulldog, Peter, in Toronto, Canada.
Golden Globes
TV
Golden Globes